Since its foundation in 1930, RADIOWEALTH has been making appliances with an eye to the future, putting out modern products which become pace-setters in the local appliance market. 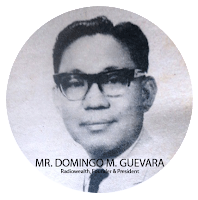 It was started by a visionary from Camarines, Domingo M. Guevara (b.1909/d.ca.1990s) who took up a correspondence course to become a radio technician—even as he was manning the family farm.

After a land dispute that made him decide to move to Manila, Guevara set up a a one-man radio repair shop that would grow to become the country’s most dominant, well-known name in electronics and appliances before Japan-made products took over the market.

The enterprise, fittingly called RADIOWEALTH, would make Guevara one of the richest and most successful modern-day industrialists of his time.

The company’s history has interesting highlights:

1930 - Founded by Domingo M. Guevara as a radio repair shop an later, as a radio dealer.

1955 – Pioneered in the manufacture of TV sets.


1956 – Started the manufacture of electronic components such as transformers, coils, chassis and metal parts.

1963 – Started the manufacture of local televison tuners under a license from Standard Kollsman Industries, the major manufacturer of TV tuners in the U.S. 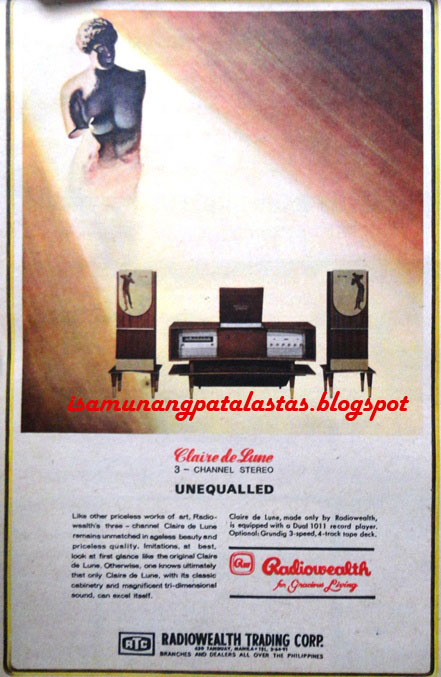 1969 – Introduced the revolutionary Apollo 19 TV with Bubble Screen, the Nocturne LSD stereo with Light and Sound  Diascope and the Interlude AC-DC operated stereo.

The company also designed and invented an authentic voltage regulator which saves appliances from damage resulting from voltage irregularities. The inexpensive device is now on the market.

RADIOWEALTH subscribed to professional advertising and the brand was actively promoted tri-media and in-store. The brand continued to flourish through the  70s, but the influx of Japanese brands caused major shifts in brand preference. RADIOWEALTH,  thus, embarked on a “Buy Filipino” Campaign.

But by then, Guevara was secure in his RADIOWEALTH business and had branched out to other other lucrative pursuits.  He even forayed into politics –elected a delegate to the 1971 Constitutional Convention that he thought he could use  to advance his platform of industrializing the Philippines.

When Martial Law was declared, Guevara’s business plan was jeopardized, especially since he was one of 7 delegates who voted against martial law. Because of this, he was pressured by the Marcos government which wanted to take over his successful business. Knowing it was futile to fight Marcos, Guevara—whose health has been affected by the turn of events—together with his wife, fled to the United States.

RADIOWEALTH eventually closed, signaling an end of a shining era of industrial revolution. But Guevara’s legacy remains in Mandaluyong, where a busy, bustling street on where his manufacturing plants stood-Libertad St.--has been renamed after him—Domingo M. Guevara St. the self-made industrialist died in the 1990s. 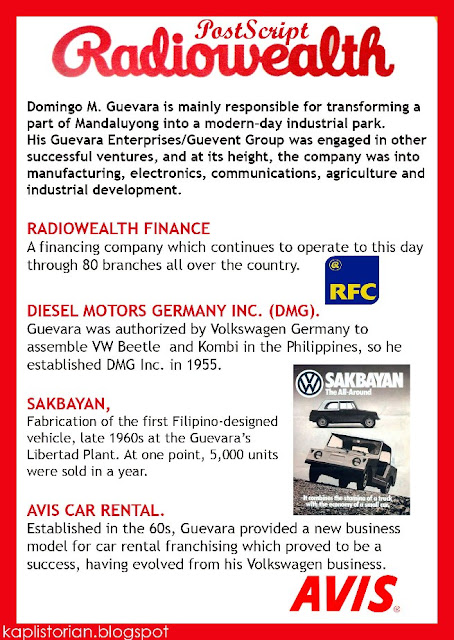