263. Is That Who I Think She Is? RIO LOCSIN for BOOGIE Jeans and HEAVENLY Silken Touch

One of the most scintillating star discoveries of the late 1970s was the beautiful RIO LOCSIN (b. 4 Oct. 1961) aka Ma. Theresa Rosario Garcia Nayve. Like her mother who had been a movie actress in the 1950s, Rio was destined for showbiz too.

The brown-eyed 5’3.5” Sienna College beauty, with her trademark mole on her right cheek, started as a model. One of her earliest was for an obscure brand of cosmetics, HEAVENLY Silk Touch  Cosmetics, done when she was in her teens. She was unbilled in the print ad.
Eventually, the model caught the attention of Regal Films. Locsin was launched her in the big box office hit, “Disgrasyada” (1978), opposite Ronald Corveau and Rolly Quizon, directed by Elwood Perez.

The reception to the new star was so thunderous that she was given similar sexy roles like “Menor de Edad”, “Aliw-iw” and “Love Affair” (1979). But she transcended that genre and proved that she could be sensitive actress with “Ina, Kapatid, Anak” (1979), appeared alongside icons Charito Solis and Ric Rodrigo.  She, of course, also lit the screen as Darna, a role reserved for a few, in “Bira, Darna, Bira” (1979).
Advertisers lined up to draft the new toast of Tinseltown in print ads and commercials. She appeared in a print ads for BOOGIE JEANS in 1979, made by Rugger Garments Mfg. Inc., based in Caloocan, which achieved a measure of success in the local jeans market. Rugger also manufactured Gitano jeans, which led to a trademark case against Gitano U.S. Both BOOGIE Jeans and HEAVENLY Silken Touch are no loner produced today, but the lovely RIO LOCSIN continues to be a luminous presence on both the movie and TV screens. 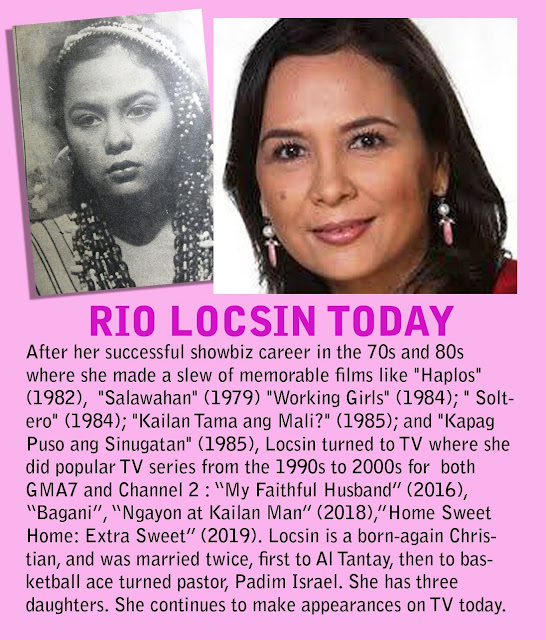 262. TAAL and MAYON COOKING OIL: For Food that “Erupts” with Flavor!

One of the more common ways to brand new products is to name them after places, whether these are places of their origins or not --like Baguio Oil,  Manila Beer, Pampanga’s Best.  Two of the more interesting brand names for  cooking oils are TAAL and MAYON, especially in light of what is happening with the 2 active volcanoes today.

In the 1950s, shortening— hydrogenated vegetable oils in solid form like Purico---were the most widely used products for cooking. That is, until liquid cooking oils were introduced in the market and slowly gained popular acceptance in the same decade.


MAYON of Philippine Manufacturing Co. is one such cooking oil that positioned itself as “the liquid shortening”. Named after the world’s perfect cone—MAYON Volcano--the marketers felt no need to use the image of the famed volcano for the product packaging. They, perhaps, believed that the name MAYON was well-known enough.


Since MAYON was a liquid shortening,  it does not solidify (sebo) fast, so  “you taste the food, not the shortening”.  MAYON Cooking Oil was also a money-saving product for cooking, sautéing, baking and frying, a pint of the product can cook up to 100 meals for the family. MAYON Cooking Oil was available in the market for over a decade since its launch in 1956.

A newer product is TAAL Coconut Cooking Oil, made in the 1970s by Malabon Soap and Oil Industrial  Co., It was a family-owned enterprise headed by 2-time Olympian shooter, Mariano “Tom” Ong, the same company that made Spring Cooking Oil, Puro, Vista and Freeto.

The inspiration of the name—TAAL Volcano—appears as a graphic image on the front panel of the packaging. The price brand also is available in bottles. The product is still in the market today, in the company’s Malabon plant, now managed by Ong’s son, Nathaniel “Tac” Padilla, a multi SEA Games medallist.in shooting, after his father’s demise in 2016.

Though launched in different decades and generations, these 2 cooking oil products share a similar brand history—that of being named after 2 restive volcanoes that are making news to this day. For the makers of TAAL and MAYON though, it is their hope that their products deliver only best to your family’s table—food bursting with bombastic flavor!

Cooking shortening, oils and lards were household essentials in every Filipino home, so it is no surprise that many products crowded the market. P&G-Philippine manufacturing Co. (PMC)’s Purico, was of course, the established shortening brand after the War, but it also had Victor Manteca Vegetal and Venus  in the 50s and 60s. Not to be outdone, its rival Philippine Refining Co., (PRC) had its Whiteband brand.  Like PMC, PRC was into the development of coconut oil-based products.

Since PMC’s Purico’s leadership seemed unshakeable, PRC looked into  the arena of liquid cooking oils where only a few players where like Planta, Mayon and Baguio Oil. Towards the end of the 1950s, PRC began advertising its CAMIA Cooking Oil, a vegetable-based product that came in cans.

The name CAMIA, came from a specie of tuberous garden plants that bore white fragrant flowers, sometime called “butterfly flower”, for the shape of their blooms, or white ginger plant. Common in the Philippines, the white kamia flower stood for purity, and became a fitting brand name for its pure vegetable oil product.

Surprisingly though, the first cans did not bear any picture of the CAMIA flower; only in 1960 that the cans sported the familiar white bloom on the front panel.

CAMIA Cooking Oil was pushed through print advertising and sales promotions through the 60s and 70s, and became a worthy competitor to the leading oils of those days. Along the way, it introduced its institutional sizes, a  new “no spill” can, and more mdern can designs in 1966. CAMIA Cooking Oil  flourished until the 1980s, but could not quite catch up with the mass appeal of  Baguio Cooking Oil marketing. 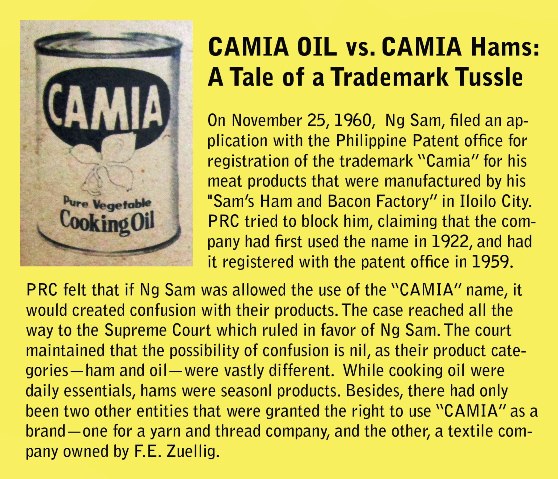 In 1984, Jollibee launched its biggest challenge to knock-out McDonald’s big burgers led by its Big Mac and its Quarter Pounders. And so, the CHAMP became available that year in all stores—“the BIG Langhap-Sarap Burger” to match big appetites.

The CHAMP print ad showed the “anatomy” of this newest burger, that was packed and crammed with great taste—“sapin-sapin ang sarap”, as the copy proclaimed.

The CHAMP became a big hit among Jollibee habitués , and for many years, had its own promotions and  TV advertising. For many years, CHAMP endured, and in 2009, even became extra-big when the patty was increased to 1/3 pound of 100% pure beef.

Inexplicably, Jollibee stores were informed by the management through a memo circulated in early December that the CHAMP Burgers will no longer be sold, after the available stocks are used up.

Beginning January 1, 2020, CHAMP—and the also popular Big Burger Steak—were pulled out of the menu, leaving the double patty  Cheesy Deluxe Yumburger, as Jollibee’s biggest burger. There is no word yet if another big burger will replace the CHAMP, which, for nearly 2 decades was considered a “perfect match” to the hearty appetites of Filipinos.

The Christmas Card tradition began in the United Kingdom when Henry Cole and artist John Horsely designed the first card in 1843, and sold them for a shilling each.

The practice caught on and the Americans introduced holiday card sending in the first decade of the 20th century However, the first  local cards were simply “tarjetas” or calling cards that featured the name of the sender and a simple one-line printed sentiment,


The first illustrated Christmas cards were imported and sold in bazaars and stationary shops in Manila. It was after the war that the practice of sending cards took off, as they became more available.


In the 60s NATIONAL BOOK STORE (NBS)  and ALEMAR’s were the leading sellers of cards, especially of Christmas Cards. NBS started its own line of Christmas cards, and the most popular were those that carry native themes and scenic and historical spots like churches, mountains, waterfalls and historical buildings. It was only in 1974 that NBS got the Hallmark Card license, which led to the burgeoning of the greeting card business.

ALEMAR’s commercially printed cards under its own name, but it also carried Gibson Christmas cards that were popular I the 70s.

Today, the custom of mailing Christmas Cards is fast fading. Quickly taking their place are online greeting cards  that are animated or scored with music, are deemed more engaging and easier to send with just a click of a computer key—no need to go to the post office.
On this spread are the seasonal ads ran by NBS and ALEMAR’s promoting their line of holiday greeting cards, to remind us of the days when sending Christmas Cards was the most thoughtful, tangible way to greet a loved one—with a pretty card that one can actually touch, read and re-reread again, and keep, as a reminder that “no one throws away memories”.