Before, preparing noodle soups and dishes was a chore: one had to get fresh noodles or dry bihon from the market, cooked at home, garnished with vegetables and flavor-enriched with spices and condiments. You can also buy Royal Continental chicken noodles in packs (Royco), but they take awhile to cook. The other option was to buy from a suking mamihan or  panciteria.

The creation of the world’s first instant noodles in 1958 by Taiwanese-Japanese Momofuku Ando in Japan changed all that. His company, Nissin, invented a process of flash-frying noodles after they have been made, giving birth to the “instant noodles”. His first product was Chicken Ramen.

In many countries, including the Philippines, instant noodles in individual packs have become basic food items for almost all households—tasty, easy to prepare, and so affordable. But it would take decades before Japan’s best-selling noodles would be introduced to the Philippines. 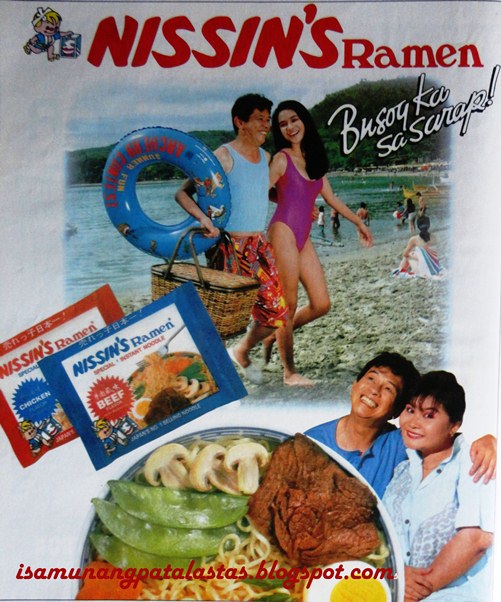 At first, NISSIN’S RAMEN was imported from Japan, and then distributed in outlets –groceries and supermarkets—packed in their distinctive red (chicken) and blue (beef)  pouches with Japanese scripts. The flavorful NISSIN’S RAMEN became an instant hit among Filipinos, and by the 1980s, the brand was actively advertising in newspaers and magazine.

The first NISSIN’S RAMEN ads that featured a celebrity were launched in 1987, starring the irrepressible Gary Lising, the “Bob Hope” of the Philippines, who helped popularized the American stand-up comedy style of entertainment. The Ateneo graduate wrote and performed his own (green) material in zany comedy show “Champoy” aired on Channel 9. Pretty soon, he was appearing in scores of movies (‘Wander Woman si Ako”, “Erpats Kung Forgets”, “Run Barbi Run”, etc.). Lising appeared as the main presenter of NISSIN'S RAMEN under the "Busog ka sa Sarap" campaign theme.

The windfall success of NISSIN’S RAMEN prompted other companies to branch out to noodle production after realizing the potential of the noodle market. Lucky Me! was introduced in 1989 by biscuit company, Monde, and would give NISSIN’S RAMEN stiff competition. The next year, Semexco Marketing Corp., which already had a winner with its beverage, Zest-O Juice Drink,  joined the noodle bandwagon in 1990 with the launch of QUICKCHOW.

QUICKCHOW laid claim to being  “the first brand to introduce rice noodles”,  and made headway in the market, capturing the Southern Philippine market that propelled it to third place nationally.

Helping push QUICKCHOW was the versatile JUN URBANO, who used his very popular “Mr. Shooli” character in the launch ads for the noodle brand in 1990. Urbano, the son of actor-director Manuel Conde, had his start in advertising as a hugely successful commercial director, megging many classic San Miguel Beer ads in the 80s.

In 1985, he created and portrayed the character “Mr. Shoo-li” who first appeared  in “Not So Late Night with Edu”. His satirical political commentaries delivered in his signature Chinese accent became a certified TV hit. This led to his own talk show, “Mongolian Babecue”. In 1991, he even starred in a film, “Juan Tamad at Mr. Shooli: Mongolian Barbecue”.

Today, the noodle brands that Gary Lising and Jun Urbano endorsed are still going on strong. NISSIN’S partnered with URC in 1996  to form Nissin Universal Robina Corp. in the Philippines which now produces local NISSIN’S noodles, including cup noodles, yakisoba, and Payless. QUICKCHOW can still be enjoyed in these delicious varieties: palabok, pancit canton, toyomansi, guisado, La Paz batchoy. However, Lucky Me! ! is the undisputed no. 1 instant noodle brand in the country, which incidentally has also tied up with NISSIN to become Monde Nissin Corp.

As to Gary Lising and Jun Urbano, there is no competition beyond their product endorsements. They are, in fact, good friends,  who first met as Ateneo students in 1961. They worked together in films like “M.O.N.A.Y. (Misteyks obda neyson adres Yata) ni Mr. Shooli” (1991), and most recently in “Ibong Adarna” (2014), which Urbano directed. Lising had a health setback in 2009, but recovered and bounced with help from his colleagues in the industry,


GARY LISING BACK ON STAGE AT SHANGRILA EDSA, https://www.youtube.com/watch?v=ZMEb1jsNuic&t=13s,
posted by Herminio Mendiola, Published on Oct 24, 2012,
Posted by Alex D.R. Castro at 2:24 PM