Movie and TV actor LITO LEGASPI (b. 25 Jan. 1942) was only 17 when he was included in the 1959 ribtickler “Ipinagbili Kami ng Aming Tatay”, topbilled by Dolphy. He would be signed up by Sampaguita Pictures (Vera-Perez productions) in supporting roles in the drama, “Halik sa Lupa, (1961, with Carmen Rosales), and the action pic,  Kapitan Lolita Limbas (1961). 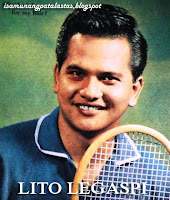 He would find his groove when Sampaguita Pictures built him up as one of their “pretty boys”, which included the likes of Pepito Rodriguez, Bert Leroy, Dinod Fernando, and Romeo Rivera. LEGASPI was cast in light romance-musical-comedies like “Joey, Eddie and Lito” (1961), where he was teamed up with Liberty Ilagan.

He was finally launched that same year in the movie, “Lab na Lab Kita”, with no less than Susan Roces, and for awhile, they were promoted as a love team.

It was Susan’s partnership with Eddie Gutierrez, however, that fans clamored for, but LEGASPI would always appear alongside the popular love duo in such movies as “Susan, Susay, Susie” (1962), “Sabina” ( 1963), “Sa Libis ng Baryo” (1964).
With his clean, well-groomed looks, LEGASPI snagged print a assignments from softdrink giant, COCA-COLA (with reel partner, Libery Ilagan), Chesebrough-Pond’s VITALIS Hair Tonic, and DURACRON fabrics, a product of the country’s leading textile mills, Gentex.

The so-called “bomba” craze—sexy skin flicks—started with the 1970 movie, “Uhaw”, starring Merle Fernandez. LITO LEGASPI was caught up in a maelstrom as he was one of the featured male stars (Tito Gala was the other) in the controversial movie that was considered pornographic by many, the case was even debated in the Congress.
Shedding off his wholesome matinee idol image, he went on to do another follow-up “bomba” movie—“Hayok” (1971) –again with Merle, Tito, and a newcomer bombshell, Rosanna Ortiz. With the government hot on the heels of  “bomba’ movies, LEGASPI made “Sinong Kapiling? Sinong Kasiping” (1977) where he won critical acclaim and was awarded an Urian trophy for Best  Supporting Actor. (1977). LITO LEGASPI is best known for playing Rodrigo Duterte in 1992 film Pugoy Hostage: Davao. 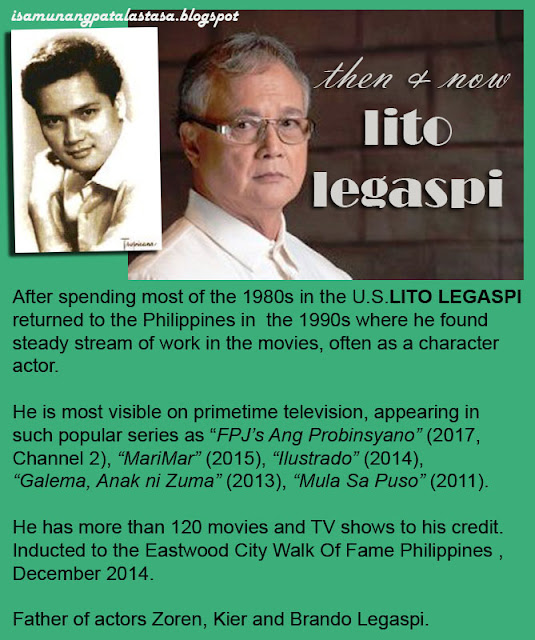