He mass produced his gum after receiving chewing gum machine patent in 1871 and began selling them in drug stores under Adams, Sons and Co in 1876. It wasn’t until the early 1900’s that the product was fully developed as the CHICLETS that we know now, now--candy-coated, and boxed in thin packs. Adams was eventually absorbed by the American Chicle Co., one of the world’s largest producers of gums and mints. 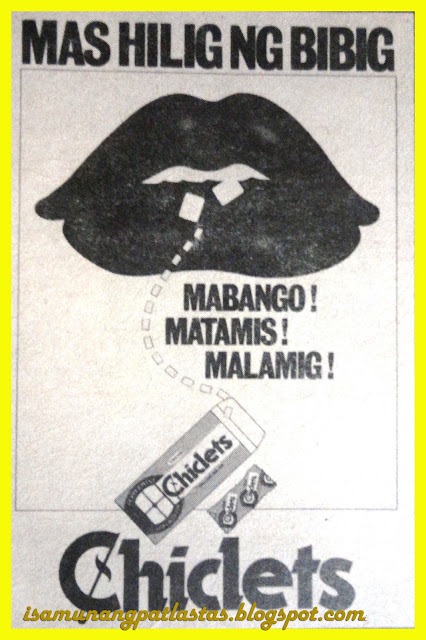 The CHICLETS thus became available in the Philippines around 1964, in Peppermint, Spearmint and Tutti-Frutti flavors. The next year, CHICLET sticks in foil wraps were launched to compete with Wrigley’s Juicy Fruit. CHICLETS were marketed and advertised on leading weekly magazines, with illustrated print ads in color.

Warner-Lambert Philippines signed up with local agency Basic Advertising in 1978, after the U.S. headquarters ok'd the arrangement. In 1979, the agency started production of  CHICLETS TV commercial—“Mas Hilig ng Bibig” (More Preferred by your Mouth)—made waves for its catchy, repetitive jingle with a melody adapted from the song “Mexican Hat Dance”, and a catchphrase—“Tsikletin Mo, Baby!”, coined by ad icon, Herminio “Minyong Ordoñez (+). The TVC hit the airwaves in the 2nd quarter of 1980. With its fast intercuts, split screens,  expressive close-ups of gum-chewing models—plus the use of the local language—the CHICLETS commercial did wonders for the brand, grabbing the market leadership from old-time rival, Juicy Fruit Gum.

SOURCES:
youtube, Lessons from Chiclets: https://www.youtube.com/watch?v=6YRQjqLbIxg, , ulpaoded 13 June 2013, by ogilvy do. Thanks, Paolo Mercado.Popi Gutay for the details.
Posted by Alex D.R. Castro at 3:19 PM