KOLYNOS DENTAL CREAM was an American-made toothpaste brand created by Newell Sill Jenkins in 1908.  It was already being advertised in Philippine magazines in the 1930s. Radio then, was already becoming a popular medium for entertainment and promotion then and many companies in the U.S. used it as a channel for marketing. Kolynos was one such product known for program sponsorships.


In 1936, KZRM held auditions for radio singers and one of those who tried out was a 14 year-old high school sophomore from Cavite—Presentacion Bataclan. So impressed were the executives that they gave her a program of her own—The Kolynos Hour. She made her singing debut in 1936 under the screen name Priscilla. Known on-air as “Priscilla, the Kolynos Girl”, she would become the No. 1 radio personality of the Commonwealth Era.


“The Kolynos Hour” ran for just fifteen minutes, every Mondays and Fridays—but it lasted for a good three years. Priscilla became a household name, and the radio station was besieged with fan mails (200 letters a week!) and requests for autographs. She earned the then incredible sum of Php 7.50 a show. 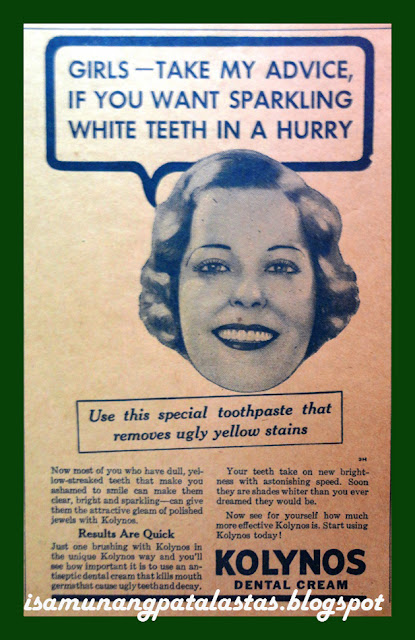 The Kolynos Girl came to typify the toothpaste belle of radio at her likeable best, her toothsome smile and 14-karat crooning voice popularizing songs like Stardust, I’m in the Mood for Love, My Reverie, All the Things You Are, and When Your Love Has Gone. She recorded for RCA and later, Lebran, Bataan Excelsior and Villar Records.


In the next years to follow, until the outbreak of the War, Priscilla divided her time between the radio and the movies. During the Japanese Occupation, she performed at the Life Theater. It was while headlining a show at the Metropolitan Theater that she met her husband, musician-saxophonist Bernardo Aristorenas, whom she married in 1944.


After the war, Priscilla did camp shows for U.S. armed forces and became active again on-air when radio became a flourishing industry in the 1950s. She, along with the Mystery Singer (Cecil Lloyd), signed up with Station KZRH and got top billing in Philippine Refining Company-sponsored shows. 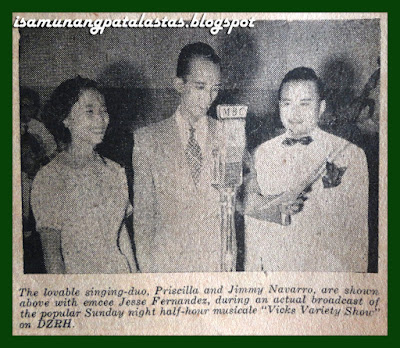 She free-lanced on “Pepsodent’s Hour (another toothpaste brand!), sang on “Vick’s Variety Show”in 1951 and was in the popular “Student Canteen”.


Overseas, Priscilla sang in Okinawa for a year at the Castle Terrace Club, then made the rounds of clubs in Taipei and Hong Kong. The Aristorenases returned to Manila in 1964 and put up a souvenir gift shop along Mabini St., called “Eyeful”.

Today, the Kolynos Girl is now an nonagenarian, who resides in relative anonymity and quiet in Alabang Hills. Little does one know that for almost 3 decades, she ruled the airwaves as a singing product ambassador , a broadcast icon, and a leading voice in the golden age of the Philippine radio industry.