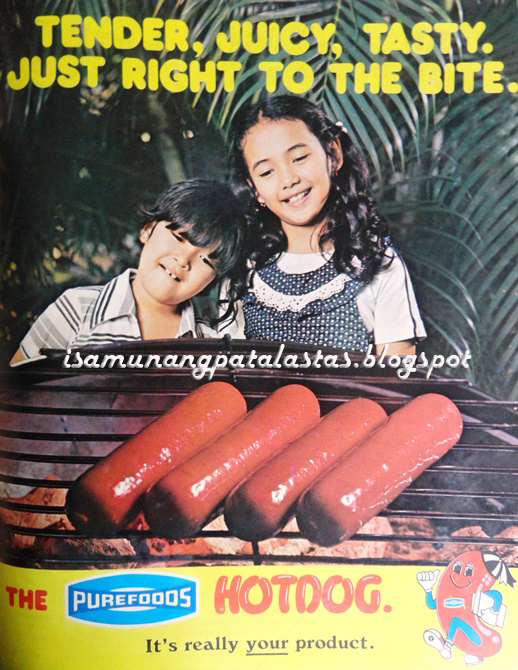 PUREFOODS HOTDOGS, the country's largest-selling hotdog, is a well-loved brand with a long advertising history. It was made by PUREFOODS CORP., beginning in 1956, along with other processed meats.

Before it was acquired by San Miguel Corporation in 2001, PUREFOODS engaged agencies to do their advertising, particularly for their flagship brand, PUREFOODS HOTDOGS. 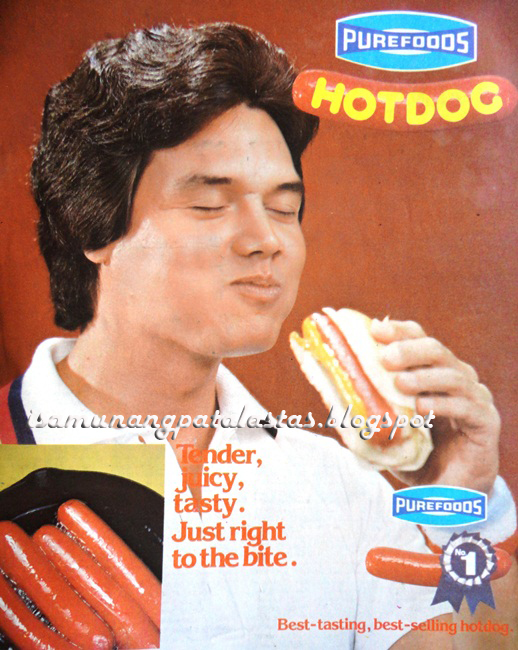 One memorable campaign launched in 1980 showed an animated hotdog running across the screen as active kids enjoyed their hotdog treats in various vignettes. The cartoon hotdog character sang a catchy jingle that praised his own merits: 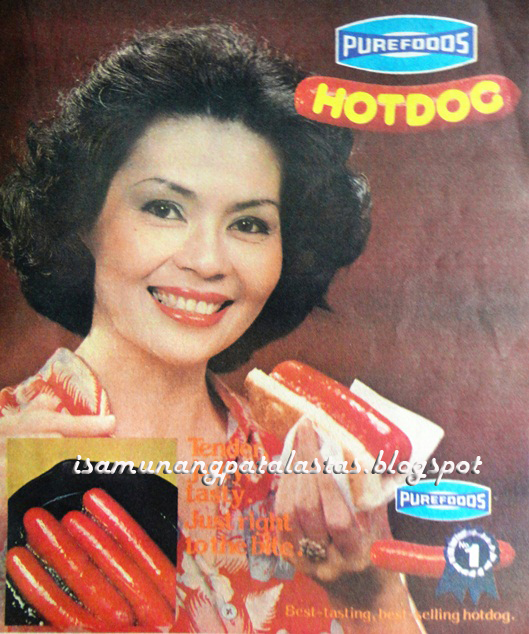 PUREFOODS HOTDOGS would go on to have more memorable and award winning campaigns in the next few years, courtesy of the charming “Dear Diary” TVC (“Carlo sat beside me today…) and the trio of award-winning commercials featuring Purefoots hotshots Alvin Patrimonio, Jojo Lastimosa and Jerry Codiñera. "Tender, Juicy" became so associated with these hotdogs that they were, at one point, nicknamed "TJ Hotdogs", for many years.


Just as Gloria Diaz was winding her reign as Miss Universe of 1969, Aurora McKenny Pijuan of Bacolod extended the winning streak of ur beauty queens when she won the 1970 Miss International title in Osaka, Japan on 16 May 1970.

The southern belle (b. 11 Nov. 1949)  daughter of Marcelo Pijuan and Lucielle McKenney. was a St. Scholastica student when she joined her first contest-- Miss Teen Philippines 1966 contest. She placed second behind Mary Jane Madamba.  Four years later, she joined the Bb. Pilipinas Pageant and bagged the Bb. Pilipinas-International title, alongside Simonette delos Reyes who won Bb.Pilipinas-Universe.

Au-au, as her friends called her, was sent to Osaka, Japan for the international contest, as a side event of the Expo ’70 of Osaka. She was singled out from among 47 beauties to succeed Valerie Susan Holmes of United Kingdom. Her runners up included Argentina (Margarita Briese), Australia (Karen Papworth), Toshie Suda (Japan) and New Zealand (Susan Greaves).  The initials of the countries that placed coincidentally spelled out J-A- P-A-N.

The tall Filipina beauty stood out for her regal bearing, and stunning mixed American-Irish-Native American-Filipino and Spanish features, scoring the first double win for the Philippines  in the popular pageant (Gemma Cruz had won the crown 6 years before).

It is also interesting to note that when crowned at the Exposition Hall Fairgrounds,  Au-Au was wearing a beaded midi-dress (a mid-calf dress worn with a pair of pants) instead of a gown—a non-traditional outfit for a royal crowning. While in Japan, she graced the Philippine Pavilion in Osaka and created a sensation.

She received a welcome fit for a queen, with beau Tommy Manotoc, in attendance. She was greeted by the First Lady, Imelda Marcos, whose daughter, Imee, would be involved controversially with Tommy, a few years after her marriage to the top golfer and basketball coach. As Au-au refused to grant a divorce, Imee’s status was that of a mistress.

Her Miss International reign was so hectic that she lost weight and often fell sick due to lack of sleep. Still, she was the toast of her proud country, and appeared in a number of high-profile ads long after her queenly duties were over. She had actually dabbled in commercial modeling even before she became a national beauty figure, doing ads for Eskinol.

Au-au had two children with Tommy Manotoc—Mavis (now Fuentebella) and sportscaster TJ Manotoc. An activist who supports many political and social advocacies, the former beauty icon is a member of  Gawad Kalinga, that works for the upliftment of people’s lives in rural Philippines. 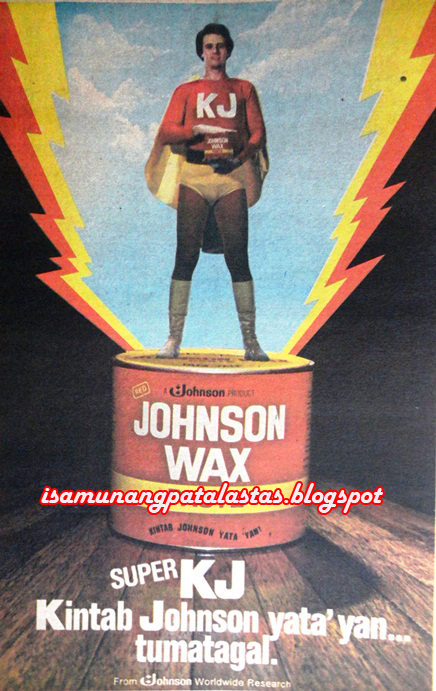 SC Johnson Philippines was founded in 1957, and operated as a subsidiary of S. C. Johnson & Sons, one of the olet family-owned business in the U.S. The American enterprise began in 1886 when Samuel Curtis Johnson bought the parquet flooring division of Racine Hardware Mfg. Co., and was soon offering floor care products. The most popular were the floor wax line.

JOHNSON PASTE WAX was among the first products the SC Johnson Philippines introduced to the local market. Over the years, it offered insect control, home cleaning, air care, home storage, and car care products. But it would always be the waxes that would be their flagship brands.

In 1979, the brand was relaunched using the A“Super KJ” superhero character who came to the rescue of a housewife harassed by 2 men. When thrown to the floor by  Super KJ to the floor, the men couldn’t help the wooden floor’s  impressive sheen---attributed by the hero to JOHNSON PASTE WAX, punctutated by a stinger: “Kintab JOHNSON yata ‘yan…tumatagal”.

Johnson & Johnson, has an early reputation as a “baby company”, and as such, its line of products all had common characteristics: Mildness, Safety and Effectiveness. This has always been true since J&J first introduced Johnson’s Baby Powder in 1894. Johnson’s Baby Oil, on the other hand was introduced in the 1930s. 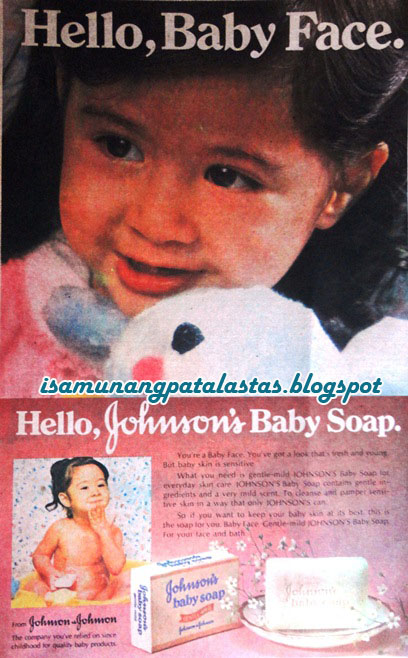 Johnson’s  BABY SOAP first appeared in a 1921  "Baby Gift Box" that contained small packages of Baby Powder, Baby Cream and Baby Soap and "was designed as a small gift that people could take when visiting a family with a new baby"

When Johnson & Johnson’s started its Philippine operations in 1956, it would take more than 20 years before Johnson’s BABY SOAP was launched. Naturally, the first ad were directed towards the care of babies. Eventually, the usage was expanded to ther members of the family. 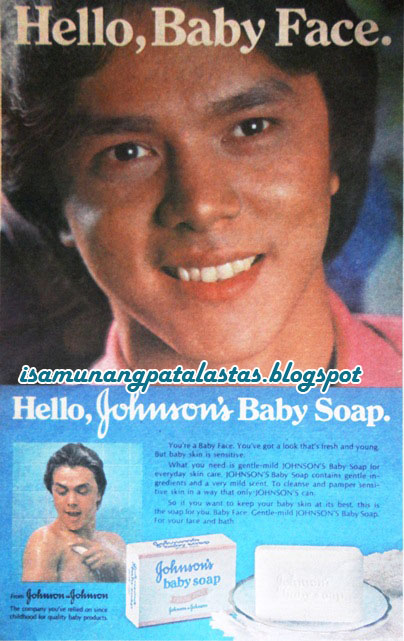 In 1981, the “Baby Face” campaign was launched for Johnson’s Baby Soap, which positions it as an ideal sap for “baby face people”—those with fresh-looking skin, but sensitive as a baby’s.

The Johnson’s BABY SOAP TVC utilized a 1926 song entitled, “Baby Face” that was first used in a 1933 movie, “Baby Face” , and which has been re-recorded many times. These 3 ads on this spread constituted the “Baby Face” print series. 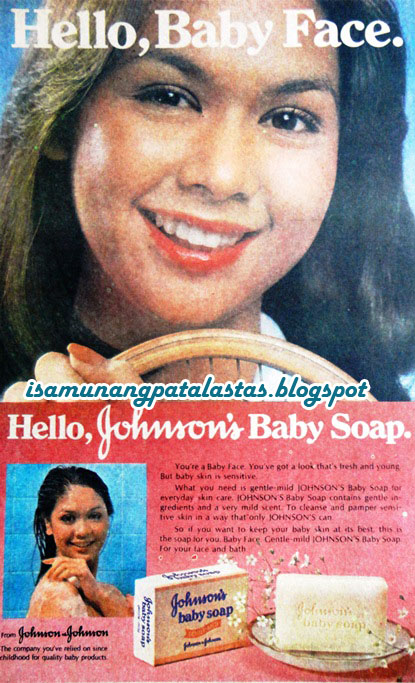