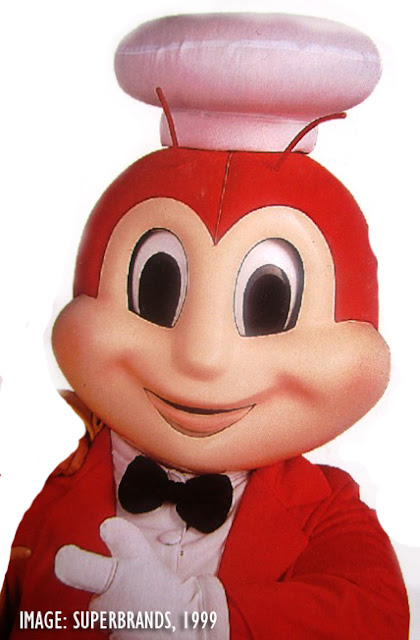 Mascots have been part of the advertising world for over a century, like Mr. Peanut and Jolly Green Giant. They personify the character of the brand—and they may come in many forms such as super humans, fantastic creatures, animals—and in the case of JOLLIBEE—an insect!

It was only in the 1980s that the use of “live” mascots was fully exploited by Philippine advertisers, thanks to the JOLLIBEE MASCOTS.

Before that, Philippine brand characters from the 50s -70s like Nars Cafi (of Cafiaspirina), Shellane Girl (of Shellane LPG) and Pancho Pantera (of Pancho Pantera chocolate drink) all were one-dimensional figures that saw print on posters and ads, and animated on TV like cartoons.

The mascots of JOLLIBEE not only fed the fantasy of children, but because they were so life-like, they could interact with them in many fun moments.

In a special way, the JOLLIBEE mascot became role models too, for each one was created with different characteristics to reflect the various product qualities. But all were likeable and appealing.

The lead mascot of JOLLIBEE Foods Corporation was , of course, JOLLIBEE, introduced in 1980. His name says it all—JOLLIBEE is a happy, loveable, active figure who flits from one place to another to spread merriment on everyday occasions.

JFC Founding Chairman, Tony Tan Cak Tiong, has often likened the mascot's character to the Filipino working folk, noting that the bee "hops around and produces sweet things for life, and is happy even though it is busy".

Ms. CHICKEE, the brand mascot for Chickenjoy, was introduced in 1983.

That same year, the mini-skirted bovine beauty,  LADY MOO, was launched to represent the Milkshakes product.

She would be joined in 1985 by MICO, a kid in red short overalls wearing a milkshake cup for a cap. All three would later be discontinued.

The fastfoods’premium burger, CHAMP, also had a mascot with the same name, introduced in 1984. With a hamburger head, CHAMP was dressed as a boxer, complete with gloves and a robe, but, like a boxer, the mascot,  has also been retired.

MR. YUM was the original name of the Yumburger mascot, created in 1989. Dressed in a dark suit, he wears a bowler hat in the shape of a Yumburger bun. In 2008, he was updated and became simply YUM, a younger, more funky boy in a raglan shirt and shades, but with the same, sesame seed-topped burger cap.

TWIRLIE was the name of the girl mascot who personified the very popular Twirly Sundaes that were launched way back in 1988. In mall shows, she performs her own special Twirly Dance.

An unusual mascot was seen in 1984, who sported his stringy hair made from—spaghetti noodles. HETTY, the resident spaghetti mascot, was nonetheless, a consistent crowd favorite.

But if HETTY seemed unusual with her noodle ‘do, POPO looked awfully strange with his stringy hair made from—French Fries! The potato boy has since transformed into a less weird-looking dude, with the cardboard pocket holder taken off his head. 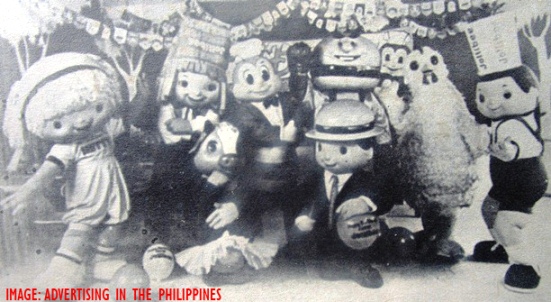 JOLLIBEE has successfully employed mascots as promotional vehicles, and they are always in demand not only for the Kiddie Parties, but also for corporate events. Christmas time is when their mascots are at their busiest, where they not only attend partie but also go on school tours, headline musical events, star in commercials, and make special TV appearances. Children would crowd around to touch them, talk to them, pinch them, pat them, adore them-to the point of hero worship.

They have been replicated as toys and dolls, featured on licensed merchandise from clocks to plates to pillows and lamps, clothing and school bags.


As the characters are also used to promote various advocacies—from propagating Pilipino as a language, imparting local values,  to endorsing sanitation and cleanliness programs—the mascots have to conduct themselves in certain way, guided by a Jollibee Manual which has a mascot code of do’s and don’ts.

Today, the JOLLIBEE MASCOTS have all become part of the Philippine pop culture, and there is not a single kid who cannot, at once, identify him and his circle of friends.

After all, they could always be counted on to spread fun,good times and great eats! As  one Jollibee fan astutely observed --“JOLLIBEE is not a bee..he is a FRIEND!”. 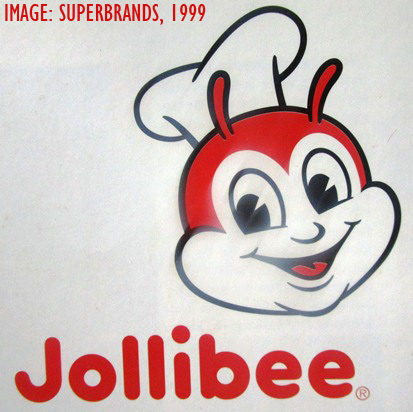 CINDY’s—the place to be—was founded in 1971 by a group of businessmen in Tarlac who simply envisioned a restaurant that served “good food in a good place”. Thus was born the first CINDY’s store in Tarlac in 1972, a bakeshop and restaurant place that served a standard fare of baked breads, and merienda favorites. 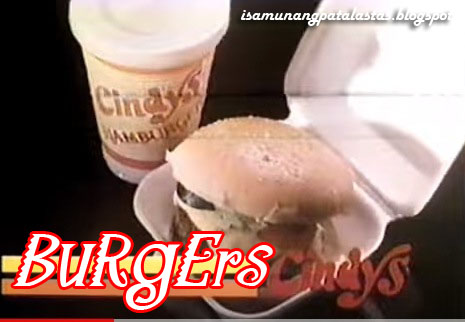 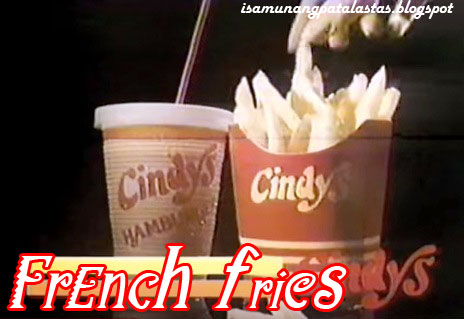 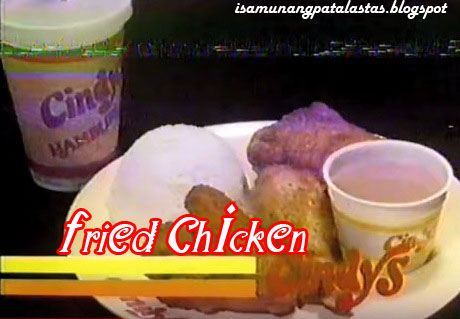 The successful reception to the store prompted  them to open more branches and to offer new menu items like burgers, French fries and express meals. But it was the bakeshop that gave CINDY’s a competitive edge.

WATCH 'CINDY'S "The Place To Be" TVC Here:

At its peak, CINDY’s was promoted through national advertising, a no mean feat for a homegrown business. Its campaign "The Place To be", spawned a memorable jingle that is still remembered until now. 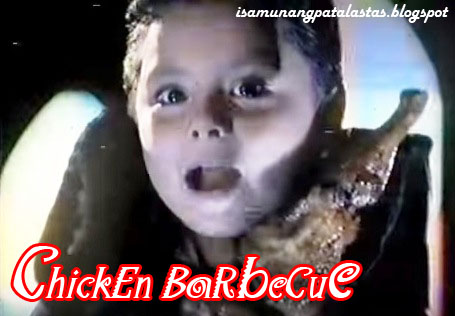 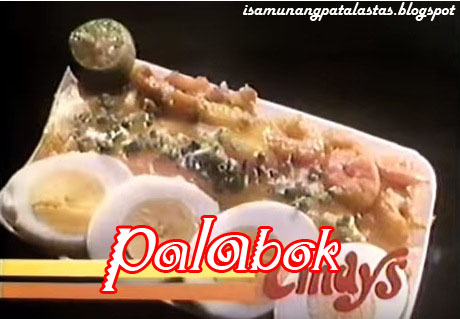 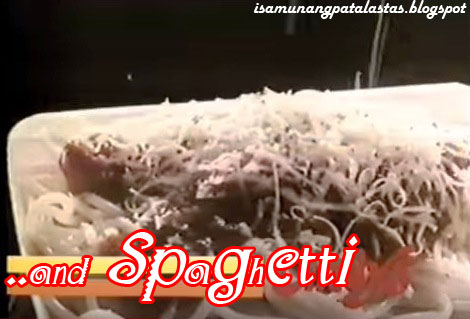 To focus on its uniqueness,  CINDY’s re-conceptualized its product in 1996, by opening a store that was first a bakery, and secondarily a restaurant. This gave it an edge above the rising number of fast food joints. Today, now on its 46th year, CINDY’s has over 62 branches nationwide. 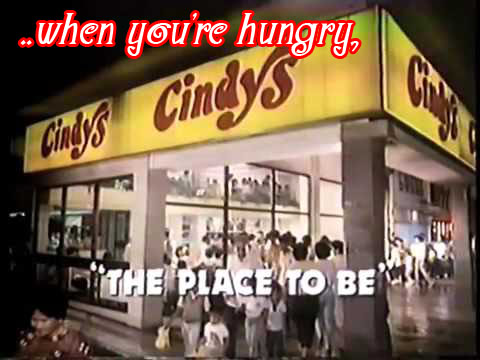 
Along with Susan Roces, Amalia Fuentes (b. 27 Aug. 1940) was one of the first true  superstars of the Philippine silver screen of the 60s decade. Naga-born Fuentes was the daughter of Alvaro Muhlach Sr., a Filipino of German-Spanish blood, and Concepcion Amador. Her father had died during the war, so when she came of age, Fuentes decided to find work to support the family.

She topped the contest, along with male winner, Juancho Gutierrez, and their careers were launched via their debut film, “Movie Fan”.

It was an instant success and she went on to make more blockbuster hits with Juancho like “Sonata” (1957) and “Pakiusap” (1959). Eventually, she was paired with Romeo Vasquez (“Pretty Boy”, “Ako ang May Sala”), who would become her husband, and father of their daughter Liezl.

But it was in the 1960s that her star shone the brightest, beginning with the “Ako ang May Sala” (1960), and the 1963 romantic comedy “Ang Senyorito at ang Atsay”. Her intense screen rivalry with Susan Roces further heightened her fame. They had appeared together in “Amy, Susie, Tessie” (1960). When Roces did the popular “Susanang Daldal”, Fuentes countered with “Amaliang Mali-Mali”, and the competition was on.

As a an actress of superstar status, Fuentes was squired by many companies to endorse their products. The largest Ford dealer in the country, manila Trading & Supply Co. or MANTRADE, signed her up in 1965 to appear in print ads for their latest car model—Fairlane 500.

She also became an endorser of REVE D’OR,  a premium line of cosmetics (Lotion, Face Powder, Perfume)  distributed by Oceanic Commercial Inc. in 1965.

Fuentes became the face of LUX Beauty Soap in 1969, a casting coup for the brand which had signed up Susan Roces earlier as one of their Lux ladies.  She did a TV commercial that showed her at her most beautiful. 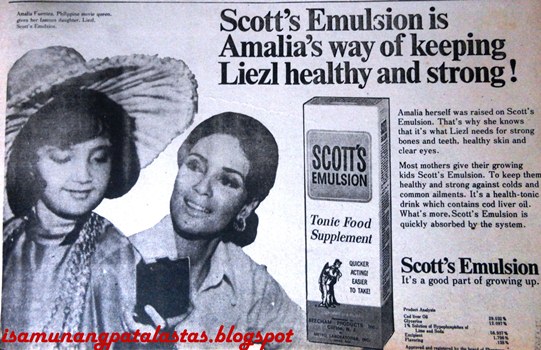 She supported her daughter with Vasquez, Liezl Sumilang, when she,too, became a child star and a commercial model, most notably for SCOTT’S EMULSION in 1974.

The checkered career of Fuentes included not just acting, but she also forayed into movie producing, screenplay writing and directing. But no doubt, it was the pulling power of her beauty that she will be remembered for, earning admiration from three generations of fans who have dubbed her as the Philippine answer to Elizabeth Taylor.


BIRCH TREE MILK POWDER was a milk brand manufactured by Veghel-Holland Dairy, and distributed in the Philippines beginning in the late 1960s. It came in attractive cans showing a Holstein-Friesian cow grazing in an idyllic field dotted with—what else?—birch trees.

The powdered milk slowly build up its market as it began advertising in 1967, with rather generic ads, but showing foreign talents. The fact that it was imported from Europe was a plus, but what made it even more attractive was its affordable price, lower than rising leader  Nido.

By the late 70s, BIRCH TREE gained over other powdered milk brands and became a market leader. Its once-generic advertising became sharper as it strategically capitalized on its affordability. Hence, it was a  tasty, healthy milk that everyone can drink. This became the basis of its mid 1980s campaign--BIRCH TREE “It's Everybody’s Milk".

BIRCH TREE TV ads, many produced on videotape, lorded over the airwaves in the 1980s, featuring foreign imagery from Europe, including windmills and talking Holstein-Friesian cows. The brand even utilized popular TV host and radio announcer Helen Vela, superimposed on moving pictures of Holland, “the milk capital of the world”.

But then, in April 1986, the catastrophic Chernobyl incident happened, in which a fire set ablaze a nuclear power plant, resulting in a radioactive fallout that drifted  drifted over large parts of Soviet Union—including Europe.  The accident severely affected the dairy business of Europe—Holland included---as the grazing lands of cows were contaminated with radioactive particles.

Two months later, 39 containers of BIRCH TREE powdered milk and 4,000 cartons of Dutch Lady milk arrived in the Philippines. Though they shipment came with  armed safety certificates, tests conducted by the Philippine Atomic Energy Commission show the milk products to have high levels of radioactive substances—5 times the level of allowable contamination.

Thus, Health Minister Alfredo Bengzon ordered the recall of BIRCH TREE Milk Powder from the market. That would signal the downfall of the milk brand, and for some time, people shied away from BIRCH TREE. The campaign that touted the Dutch origin of the milk brand only added salt to injury.

As years passed, and as the Chernobyl incident was becoming a distant memory, efforts to revive the brand began with a TV commercial that reminded people that “you can’t put a good milk down”. BIRCH TREE loyalists continued to patronize the brand after the dust had cleared and the ban was lifted.

It took Century Pacific Food Inc. (CPFI), the Filipino food conglomerate founded in 1978 by Ricardo S. Po Sr., to revive the milk brand in 2001. It is currently manufactured by its business unit, the Snow Mountain Dairy Corporation, a business unit belonging to the Century Pacific Group of Companies, which, by 2008 became the 2nd largest liquid milk company in the country. It is hoped that BIRCH TREE will once again reclaim its place in the Philippine market as one of the leading players in the category, now that it is already manufactured locally.