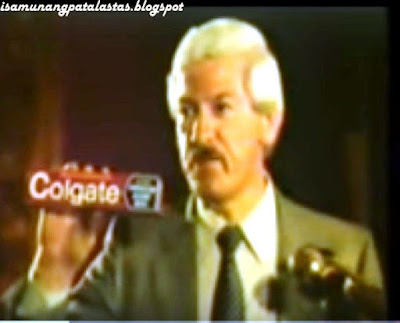 COLGATE DENTAL CREAM’a most visible advertising campaign first aired in 1981 featured the “ New 2-Fluoride System” story, which promised double protection to teeth. This Colgate dental breakthrough was in response to the launch of Crest Toothpaste in the Philippines, another formidable product of Procter and Gamble. 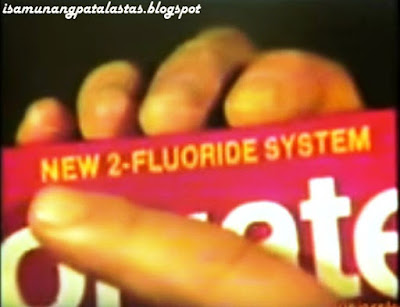 Delivering the story is a character named ERIC BAINES, an authority figure who credibly showed the superiority of the 2-fluoride system through a “chalk demo”, as seen in this commercial:

Eric Baines was a constant figure in Colgate’s advertising, appearing in several spots that made him recognizable to many Filipino viewers—what with his trademark white hair, moustache and business suit. His presence—whether driven by a car or entering a conference room—was always announced with excited squeals from the audience—“Si Eric Baines! Eric Baines!”. 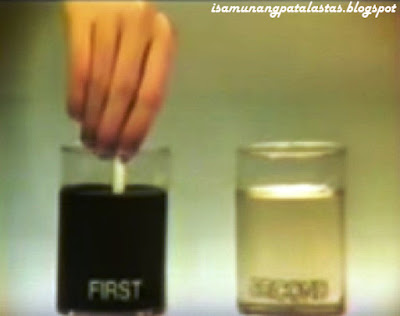 Just who is Eric Baines?
Well, Baines is neither a dentist, a doctor or a figure created by an ad agency executive. He is actually a real-life professional—Colgate’s Worldwide Director for Research & Development based in Piscataway, New Jersey. He remained with Colgate until the 1990s, often working in the Asian region, until his retirement.

Baines, himself, could not believe his popularity here, and even after the 2-fluoirde campaign came to an end (it trounced Crest, by the way), his name still crops up in consumer research every now and then. Whether he likes it or not, Eric Baines has become part of Philippine pop culture.

76.THE 7 UP UNCOLA CAMPAIGN: Making a Non-Cola Drink Cool Again

7 UP was introduced in the mid 50s in the Philippine by Pepsi-Cola Bottlers Philippines.  The name, they say, was derived from its “7 natural flavors blended into a savory, flavory drink with a real wallop.”  Predictably, 7 UP was advertised as a pick-upper, with crisp lemon-lime flavor that refreshes and lifts spirits up.

It targetted the active family and came up with the  1952 slogan “The Fresh Up Family Drink”,  to replace the earlier “You Like It, It Likes You”.  Later variations were also used like “Fresh Up with 7 UP”,”Nothing Does it Like 7 UP”. Advertising for 7 UP began in the Philippines in 1955, with print ads that simply copied the original U.S. version.

7 UP was drank by older people because they believe it was less gassy than cola drinks, and therefore less stomach-upsetting. This ‘medicinal’ image was considered uncool by the younger set. Not even the teen campaign the product launched in the sixties—and which was adapted in the Philippines-- could make its image more contemporary.

Then in 1967, its advertising agency, J. Walter Thompson conceived of a campaign that celebrated the uniqueness of 7 UP against cola-based drinks.

The UNCOLA Campaign sought to promote the idea of the fact that the product is not made from cola nuts, a differentiating angle that resonated with young people at the threshold of the so-called  “Me decade”,  which described a new attitude of Americans towards individualism.

The UNCOLA Campaign was rolled out in 1968 and ran through the 70s in the U.S. with many memorable ads for TV and print. The campaign doubled sales for the product and by 1972, 7 UP ranked as the third largest soda marketer behind Coke and Pepsi.


The UNCOLA Campaign was adapted in many countries, including the Philippines. The local print ads which first came out in 1970 were similar to those produced in the U.S. which started running them a year earlier.
The eye-popping executions capitalized on the psychedelia craze, with fantastic, graphic illustrations rendered in bright, vibrant colors-- an artistic style popularized by the artist Peter Max.
There were pop art poster giveaways, UNCOLA upside down glasses,  and psychedelic dance parties that magnified the campaign in the stores and on-ground.

Suddenly, 7 UP was  a hip, with-it brand again. The UNCOLA TV commercials aired here included two versions, one of which became a global hit, and made a star out of its presenter. The  JWT-produced  TV commercial--which was aired on Philippine TV in 1972-- starred  actor, director and choreographer Geoffrey Holder as a Caribbean planter explaining the difference between cola nuts and 7 UP's "uncola nuts," lemon and lime.

WATCH 7 UP's 'UNCOLA" TVC HERE:
Holder’s performance was so well-remembered that he was signed on to do more versions of the same campaign.

Another UNCOLA Ad was a product-the-hero ad scored with a jingle noted for its sheer lyrical strength. The jingle wasn’t  just selling fizzy beverages twelve ounces at a time, it was singing praises to a way of life that challenged all conventions. 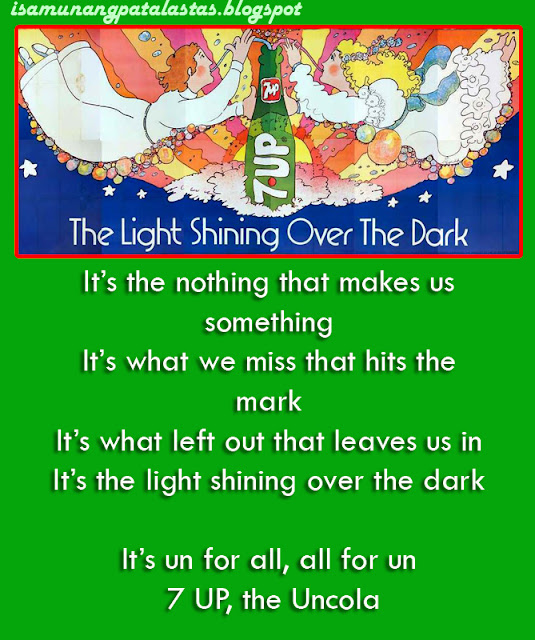 The 7 UP UNCOLA Campaign had a good run, but the succeeding initiatives—including its Fido Dido “Cool to be Clear” ad, did not do much to stop the increase of the share of its primary competitor—Sprite—throughout the ‘90s. By 1998, the 7 UP bottle underwent a design  face-lift, which dropped the term "Uncola" from the soda's packaging.  And there goes a piece of advertising history.

Uncola: The Video History of a 7 UP Breakthrough Ad
http://adage.com/article/news/uncola-video-history-a-7up-breakthrough-ad/116484/

One of the busiest commercial models in the early to mid 1950s was the beautiful GLORIA ROMERO (born Gloria Galla. 16 Dec. 1933, in Denver, Colorado to Filipino Pedro Galla and American Mary Borrego). She was only four when she returned to the Philippines, settling in Mabini,Pangasinan—her father’s hometown. The war caught up with the family, so the Gallas decided to stay here.

She tried her luck in showbiz in 1950 playing bit roles for several production outfits, but it was Sampaguita Pictures that noticed her and who gave her the screen name ‘Gloria Romero’ (after Eddie Romero, who directed her in her early 1951 movie,”Kasintahan sa Pangarap”.

Romero was cast in  Monghita (1952), her first lead role, but it was her appearance in Dalagang Ilocana (1954) that gave her a FAMAS Best Actress—and a place in the top list of Philippine film superstars.

The young ingénue was not only kept occupied filming pictures, but also had her hands full doing pictorial for a variety of products. She was the perfect endorser as she had a spotless image (she even won the role of the Virgin Mary in ‘Martir sa Golgotha”, a 1954 Lenten movie), her deportment and work ethics, of the highest standards. After all, Romero was trained by the Sampaguita bosses themselves—taking her on trips abroad, providing her wardrobe and giving her lessons in social etiquette.

Her early endorsements include leading beauty and personal products as well as consumer goods. Most of her output were Print Ads, as Television was still at its infancy stage at that time.  Romero was especially known for being a Camay Girl and a Coca Cola presenter.

In the 70s, she was cast in “King and I” TVC commercial for Superwheel, a popular ad series based on parodies of historical characters. At the 1988 Creative Guild Ad of the Year Awards, she romped off with the Best Actress trophy for her “Manang Biday” Superwheel TV Commercial.

Romero’s career spans over 60 years and she continues to be active in movies and TV today. She has appeared in sitcoms like Palibhasa Lalaki,  "Richard Loves Lucy" and in countless drama anthologies for GMA 7.Currently, Romero appears in “Juan Happy Love Story”.


For her achievements, she received the first 2009 Lifetime Achievement Award from MTRCB (Movies and Television Review and Classification Board) Award, Huwarang Bituin Award from the 57th FAMAS Awards, and named as one of the 13 "Movie Icons of Our Time".
Posted by Alex D.R. Castro at 3:21 PM 2 comments: