233. WHEN VAPE WAS A MOSQUITO KILLER, NOT AN ELECTRONIC CIGARETTE

Today, many young people in particular are into smoking electronic cigarettes or vaping. For some, it is a way to transition from traditional cigarettes to not smoking at all. But most use it to look cool and hip. How exactly does it work?

E-cigarettes heat nicotine extract flavorings to create a water vapor that one inhales. Nicotine is addictive, so whether you are vaping or smoking a traditional cigarette, the risk of harm is still there.

But do you know that as early as 1966, a product with the brand name VAPE, was introduced in the market? No, it was not an alternative smoke gadget,  but an “electronic mosquito destroyer!”

FUMAKILLA VAPE kills mosquitoes by emitting fragrant vapors. No mess…no smoke. All you need is a VAPE mat that you insert in a heating pad. When plugged, the VAPE mat is vaporized to exude invisible vapors that kill mosquitoes safely. The vapors are virtually harmless to animals and humans.

There are even 2 kinds of VAPE pads to choose from—the regular pad and a decorative version with a human bust that conceals the mat.  The gadget is manufactured by FUMAKILLA Limited, and was distributed by Tancho Corporation (of the stick pomade fame).

FUMAKILLA VAPE did not catch on, possibly because it was perceived as more expensive—it required electricity to run. Traditional katols (mosquito coils) however, were more practical as you can light them, and leave them—no electricity needed. Katols have also been used for decades, and are more available (you can buy them from sari-sari stores). Old habits die hard…and in the end, it was FUMAKILLA VAPE that died as the 60s decade came to a close.

When SUKI SOY SAUCE was launched in the Philippines in 1963,  it was made clear that it was the local  brand of the world-renowned “Kikkoman”. Kikkoman’s history goes as far back to the 17th century, when the forefathers of the Mogi family concocted the dark brown seasoning sauce from soy, wheat, water and salt in the Japanese town of Noda. Kikkoman Soy sauce won honors at Expo Vienna in 1873 and Expo Amsterdam in 1881 for its quality and taste.

The product caught the fancy of Filipinos who were familiar with the distinctive soy sauce flavor of Kikkoman, but its price—higher than ordinary soy sauce brands—proved to be a factor in its market longevity. By the start of the new 70s decade, SUKI SOY SAUCE was gone. In 1970, Acoje Mining Co. attempted to produce a purely local soy sauce with the brand name “Lotus”, but the product never got off the ground due to brand name infringement issues.

Today, Kikkoman is the world soy sauce market leader and it is distributed by Kikkoman Philippines, established in 2011. 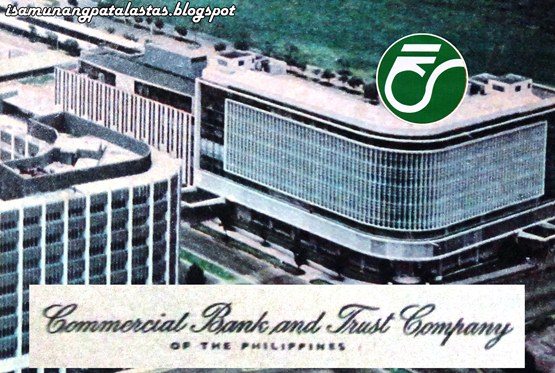 Commercial Bank and Trust Co. (COMTRUST) was a commercial bank that was founded in 1954 and its head office was at the J.M. Tuason Bldg., in Escolta. By the 1960s, the fast-growing bank had bracnches along Taft Ave., Quezon City, San Fernando in Pampanga. It moved to Makati, then, a burgeoning commercial district, a spanking new corner building on Ayala Avenue in mid 1960s.
The bank started advertising actively in the 1960s. It was rebranded in the 1970s as COMTRUST, complete with a modern logo.
In 1973, COMTRUST rolled out its new corporate commercial featuring a minute-long song that achieved a measure of popularity with its simple, but engaging melody and its lyrics that talk about building a bright future together.

The song was composed by Jose Mari Chan, who by then, was an established singer and composer, known for hit songs like “Deep in My Heart”, “Afterglow”, and “Can We Just Stop and Talk While?”, which was the country’s entry to the 1973 Tokyo Music Festival.

LISTEN TO THE "COMTRUST JINGLE" HERE:

Singing the song was Tillie Moreno, one of the female vocalists of the hugely popular Circus band that spawned great singers like Basil Valdez, Hajji Alejandro, and Jacqui Magno. “We Share the Same Horizon”, was so popular with the young crowd that Jingle Chordbook Magazine, the top music magazine of the 1970s, had to include it on its pages, complete with guitar chords. To top it all, Vicor Records put out a 45 RPM disc of the said jingle.

By the late 1970s, Ayala Avenue was teeming with scores of banks, and the banking giant, Bank of the Philippine islands, began acquiring other banks. COMTRUST became one of its notable acquisitions in 1981. 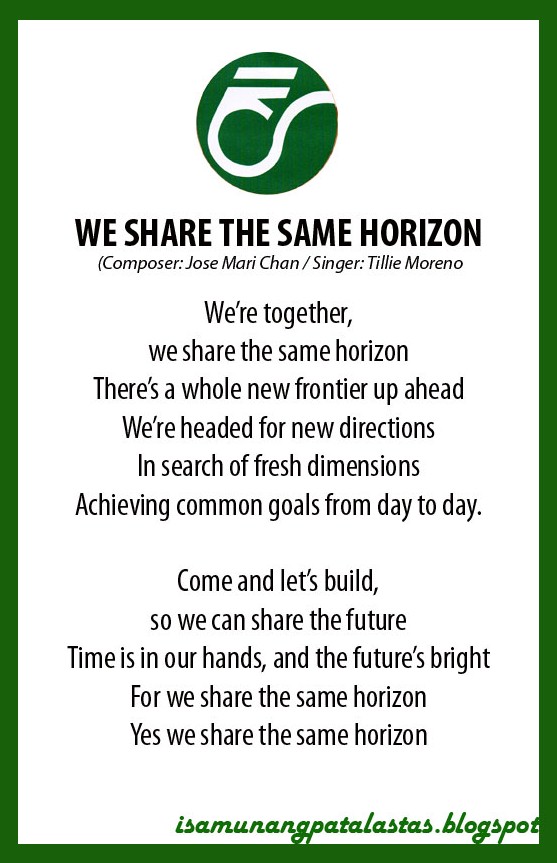 The only reminders of  COMTRUST today is its distinctive saucer like building in Escolta designed by national Artist Jose Ma. Zaragoza, and its memorable jingle –“We Share The Same Horizon”, which fortunately is included in one Jose Mari Chan CD compilation, “Strictly Commercial”. 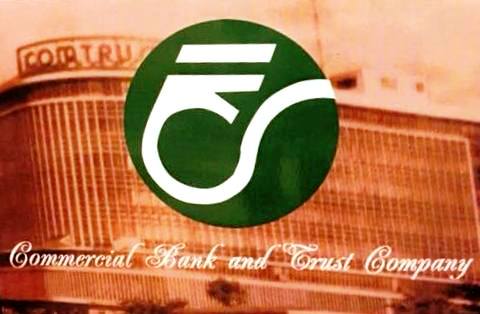 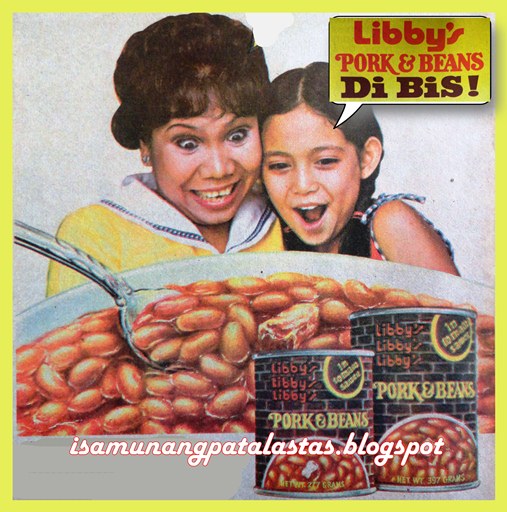 By 1974, the TV sitcom “John en Marsha”, was RPN’s prized jewel, achieving consistently high TV ratings, and raking in big advertising revenues for the channel. It had started just a year before, in May 1973,  and its popularity was largely due to the talented ensemble, led by veterans Dolphy (John) and Nida Blanca(Marsha) as the mismatched Puruntong couple (in terms of status), whose relationship is plagued by meddling mother-in-law, Dely Atay-Atayan (Dña. Delilah).

Supporting the leads were two newcomers—MARICEL SORIANO (Shirley), who played the youngest of the Puruntong family, and Dña. Delilah’s always-shrieking serving maid, MATUTINA.

MATUTINA aka Evelyn Bontogon, started as a radio voice talent. The versatile Evelyn had an ‘elastic’ voice that she used to voice radio soaps—using it to sound like a child, an adult or any other character. She was discovered for TV when she was cast as a househelp named “Matutina”  in a TIDE commercial where she used a a high-pitched, shriek voice that made an impression on TV viewers, as well as talent casters.

On the other hand, MARICEL SORIANO (b. 25 Feb. 1965)  started her acting career at age 6 in the 1971 Sampaguita Pictures’ “My Heart Belongs to Daddy” with Tirso Cruz III and another kiddie star,  Snooky.  Her grandmother had brought her to the studio where Maricel charmed the producers with her acting and singing talent. She attributes her comic skills to her on-screen father, Dolphy, who guided her early in her career.

Just like the other “John en Marsha” characters, MATUTINA and MARICEL had their own following and fo this reason, the two were cast in a LIBBY’S PORK & BEANS campaign that was launched in 1974.

In the Philippines, LIBBY’S PORK & BEANS was manufactured under Libby’s license by RFM Corporation, Pasig, Rizal. Its main competitor was HUNT’s, the market leader. The Maricel-Matutina campaign was notable for a catchphrase –“LIBBY’s! It’s DI BIS!”

The LIBBY’s brand passed on to a succession of owners—Libby, McNeill & Libby was acquired by Nestlé in 1970. In 1998, Libby's canned meat business was sold by Nestlé to International Home Foods, and became  International Home Foods. In 2000, it was acquired by ConAgra. Today only LIBBY’s Vienna sausage and Corned Beef are available in the Philippines. 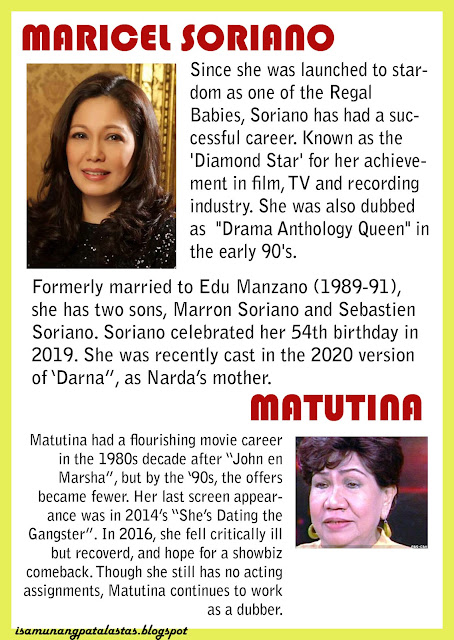 GOLD EAGLE BEER  was launched around 1981, a low-cost, flanker beer of San Miguel Corporation. It was looked at as a light-bodied beer made for the working class to enjoy at day’s end. It was the first beer assignment of McCann-Erickson, and the launch commercial was mainly a brand awareness, jingle-based campaign that showed an eagle being released to the skies, with shots of the product interspersed with the soaring bird, to the beat of “Let the GOLD EAGLE fly!” refrain. 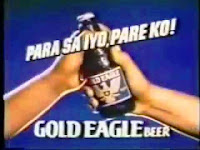 The account went back to Philippine Advertising Counselors and in 1988, the agency developed a popular GOLD EAGLE campaign featuring the Bad Bananas, a  group of actor friends that included Christopher de Leon , Edgar Mortiz, Jay Ilagan† and Johnny Delgado† .

They had been stars in a highly popular comedy-variety TV show called “Goin’ Bananas” in 1986. It moved to IBC, and then to ABS-CBN, in 1987, where its following grew bigger.

The story is set in a billiard hall where we find the Bad Bananas at play. A kibitzer, superbly played by Ricky Fernando provides commentaries as they play, annoying them in the process. (For his portrayal, Fernando would be named as one of the Top 10 Advertising Models for 1988).


The billiards kibitzer then demonstrates his moves, hitting the ball accurately one by one, as he amazes the gang with his playing prowess. He even took their challenge to sink a bowling ball on the table! The Bad Bananas rally around him, treating him with a bottle of  GOLD EAGLE BEER.

There were two versions of the TVCs, one, dialogue-driven, and the other, jingle-based using the full “Para Sa ‘Yo,Pare Ko!” song. “Billiards” was perhaps the most memorable ad produced by GOLD EAGLE BEER, which, to this day, continues to delight its loyal core drinkers.