139. Where Are They Now? THE UYTENGSU CHILDREN of Alaska Milk Products

The ALASKA MILK empire was begun by a Wilfred “Fred” Uytengsu Sr, who had grown up separated from his family for part of World War II. As a teen, he did forced labor for the Japanese under grueling conditions, such that he contracted malaria, and was sent home. After the war, his godfather, Robert Williams, sponsored his  studies in the U.S. and at 16, Uytengsu began an industrial engineering course in Stanford.

After graduation, the young engineer began a career in the food industry, and in the late 1950s, he established the General Milling Corp., a flour mill business that became so successful that he ventured into other businesses—including livestock, feeds, and dairy. Thus in the 1970s, ALASKA MILK was born.

ALASKA MILK became the a leading name in the Philippine milk industry, moreso when it began  rolling out its advertising campaign in the mid 70s. What made the ads more memorable was the presence of the three Uytengsu children in the ads produced by ALASKA’s ad agency, Reach  Inc. The three children—Wilfred Steven, Candace and youngest Michael were the children of Wilfred Sr. with Bonnie Brooks, an embassy official assigned at the U.S. Embassy in Manila. 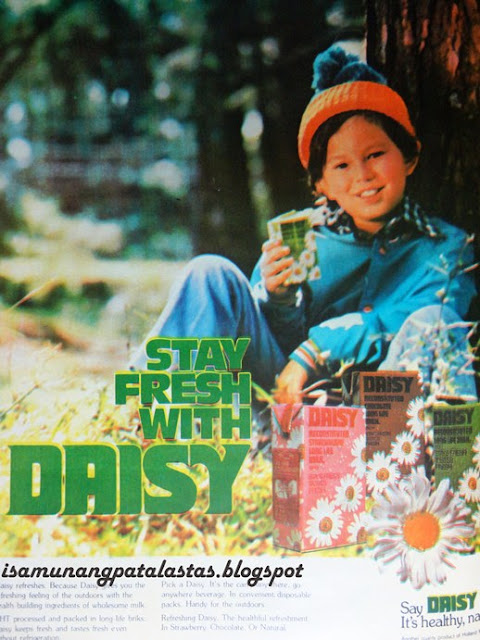 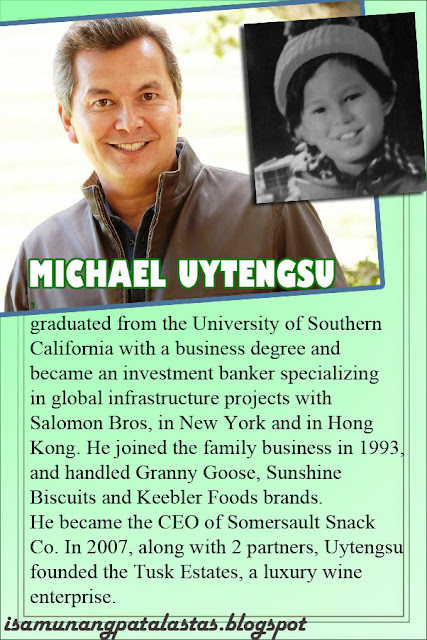 Youngest Michael Uytengsu is best remembered as the young boy in the 1974 ALASKA MILK TV commercial, in a basketball duel against Cisco Oliver. (Read the article here: Michael Uytengsu, Alaska Boy) He also was featured in the packaging of the short-lived ALASKA Quick Cooking Oats. 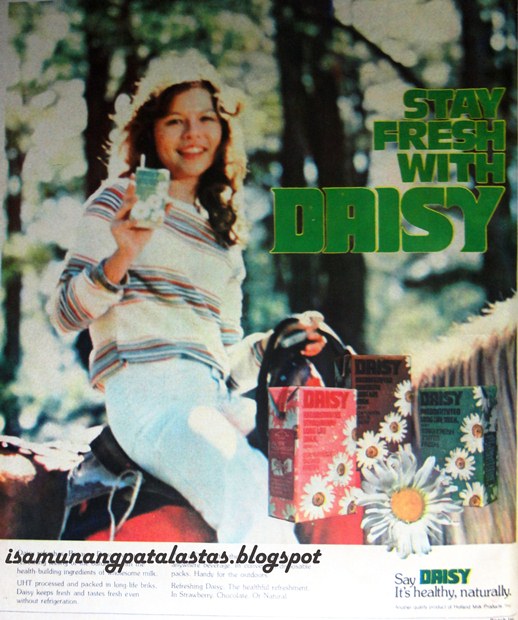 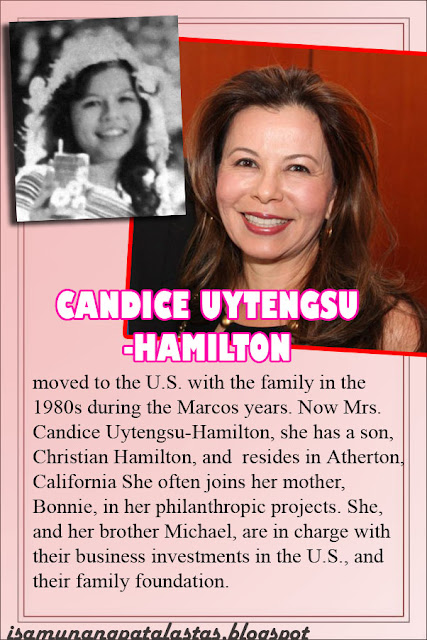 Candice or Cindy  Uytengsu, was the featured model in the Daisy Reconstituted Long Life Milk line, punctuating the commercial with her saying “Pick a daisy. It’s healthy..naturally!”. Her mother, Bonnie, made a cameo role in the launch commercial. 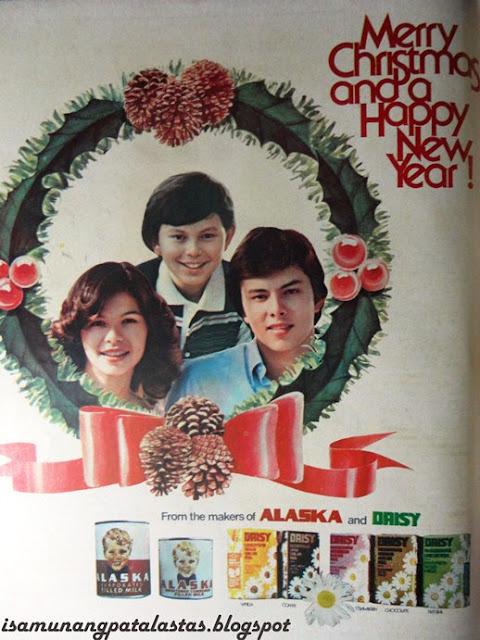 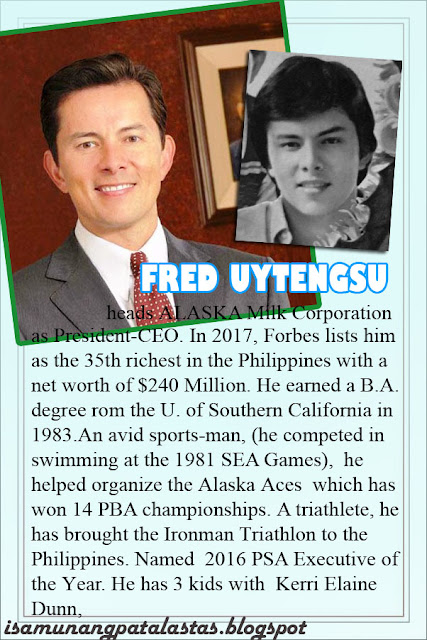 The eldest, Wilfred or simply Fred Uytengsu, appeared in a corporate Christmas Ad of ALASKA MILK, in 1975, along with his siblings.  He was just 14 at that time.

Over the years, Fred Sr. traveled between the Philippines and California, as the three kids grew up in Atherton, California, close to the Stanford University Campus. Fred Sr. would live to see ALASKA MILK CORP. flourish and become an icon brand in the Philippines, He would turn over the reins of the business to his son Fred Jr, in 1998, He died in 2010, at age 82. The three children are all American citizens. 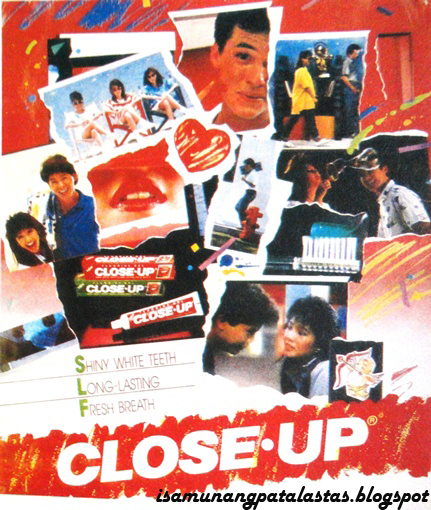 The Philippines caught the Music Television (MTV) fever in the 1980s, which used music videos presented by by video jockeys or VJs. The creatively-produced videos used early computer techniques, quick, out-of-synch editing, spliced with mood footages and unrelated visuals—a fresh look that appealed to the young generation of that time.

Ad agencies took note of this—and Lintas: Manila—sold the bold idea of using MTV style ads for Philippine Refining Co.’s CLOSE-UP TOOTHPASTE, which is positioned as the toothpaste for  young Filipinos. Maria Lourdes “Diame” Alba, the woman behind this concept, relvealed that the use of an MTV-style commercial to relaunch the gel toothpaste that has been in the market since the early 70s, was an experiment in breaking out from the mold of youth advertising. 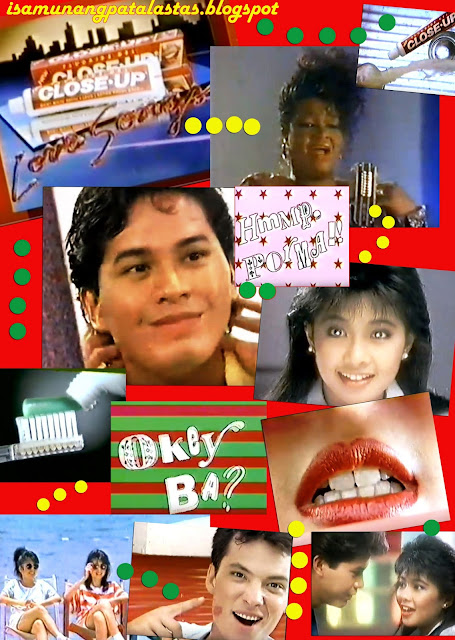 Since it was difficult to present the MTV imageries using a traditional storyboard, the Lintas creative opted to make a rough video using past CLOSE-UP footages edited with computer effects, using Gwen Guthrie’s reworked “Close to You” song.The ideas was met with the PRC marketing team’s approval, then headed by Peter Dart and Angie Lacson.

Lintas: Manila then assembled a creative production team headed by Director Jun Reyes to produced the longest commercial in history: 2 minutes and 17 secs.—a fanciful, a little irreverent, a bit amusing and a romantic music piece—that was promoted a a TV event. When the CLOSE-UP “Close to You” ad unfolded on Philippine TV in early 1987, the MTV was met with amazement  and acclaim, with many thinking it was a slick, foreign material.  Teeenrs went agog over the commercial, and college-age students lapped it up, and the ad became a marketing case study in schools.

Since then, Lintas:Manila have produced 3 more MTV style commercial versions—“Closer to your Love”, by Al Jarreau and “When I Fall in Love” (1988)  by Natalie Cole.

At the time of his death in Manila in 1952, pioneer shoe manufacturer of the Philippines, Frank H. Hale (b. Aug. 30, 1872) was called “Friend of the Filipino People.” He was also known as “Mang Isko” by millions of Filipinos, who gave him this nickname in appreciation of his contribution to Filipino life. His vision was that every Filipino replaced his or her chinelas with a pair of sturdy, stylish, and affordable shoes.

The brand ESCO became a household word, and its shoes were soon being worn even in remote areas of the Philippines. Mr. Hale became the largest exporter of shoes to the U. S. and Europe. At the outbreak of WWII, Esco was the largest manufacturer of shoes in the Philippines and, according to some economists, possibly in the whole of Asia.

From humble beginnings as a volunteer cobbler with the U. S. Army aboard one of the American ships sailing to the Philippines in 1898, followed by his setting up shop in Fort McKinley under the auspices of General Pershing, Hale built what became Esco.

Having grown up on a wheat farm in California that suffered from a wheat market disaster in the U. S., he was determined to create something needed in the Philippines to last for generations to come and to be a stable organization staffed by Filipinos for Filipinos.

Reinvesting all profits made, he turned the cobbler shop into a modern industry. He arranged for machinery, backed by royalties, to be brought from United Shoe Manufacturing in Boston, Massachusetts, and imported the finest leathers from the U. S., Italy. Argentina and Australia, to manufacture fine shoes capable of competing worldwide in terms of style and strength.

ESCO became the manufacturer for leading brands in the U. S. and Europe, as well as the contractor for military and industrial shoes in the Philippines. Manpowered by 100% Filipino skilled workers, ESCO became a model corporation where employees were given housing, medical, social and sports facilities. Employees’ families thrived, and some opened up their own businesses backed by ESCO resources.

Hale then experimented with Philippine materials, opening Tropicraft Corporation, which experimented steel and plastics to increase the strength and life rattan furniture. His admiration of the Philippines led him to call it the “Land of Promise, Opportunity.” He was included in Who’s Who with other leaders of agriculture and industry in the Philippines.He also opened Lyric Music House, bringing in the finest musical instruments from abroad for the tastes of talented musicians of the Philippines.

During WWII, the Japanese military government confiscated the factories and turned them to their own uses. Mr. Hale was interned in Santo Thomas where he helped sew up older co-interns’ shoes. Reconstruction after the war meant adjusting to new conditions within the new Philippine Republic. He was weak by then but nevertheless
returned to success but on a smaller scale.


As Nestle’s Tita Maggi was winding down her reign, another “tita” appeared on the ad scene as the brand name for a condiments line by Zest-O Corporation. TITA FRITA included bottled tomato and banana catsup, and hot sauce. 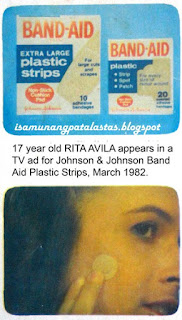 To launch the new products, the company created a brand character in the mold of Tita Maggi—wearing a chef’s hat, an apron over a colored shirt.

They found the image of TITA FRITA in Rita Avila, then a 24 year old actress with 2 years of showbiz experience under her belt. She had dabbled in commercial modeling in her teen years, and no one knew at that time that her career was about to soar with her appearance in so-called "ST" films, with soft core content.

Surprisingly, the wholesome TITA FRITA character took off when the ads aired, and so did Avila’s rise to stardom as a sexy, and later as a dramatic actress.

Today, TITA FRITA is  no longer as extensively advertised (now sold as institutional products). However, Rita Avila, aka TITA FRITA, continues to enjoy her showbiz career to this day, on both the TV and film screens. 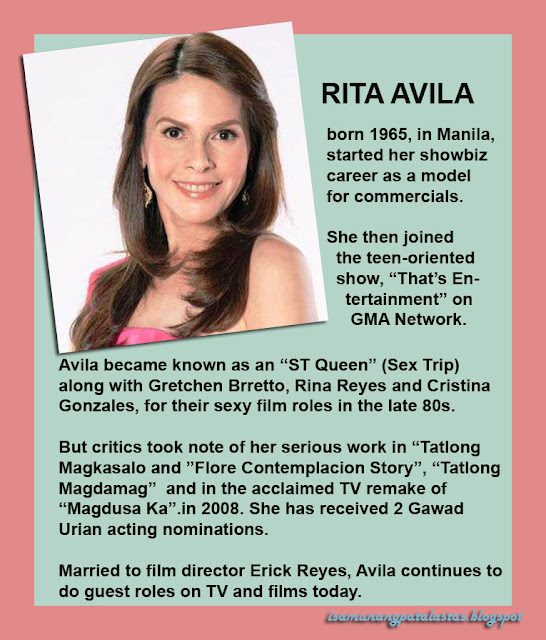 Info: https://en.wikipedia.org/wiki/Rita_Avila
Posted by Alex D.R. Castro at 5:17 AM 4 comments: