STAR MARGARINE was first produced by the Philippine Manufacturing Co. in 1931, and 4 years later Procter & Gamble of Cincinnati acquired PMC. STAR already had a local following by then, but P&G was determined to market the brand better in its communication of real consumer benefits.

Before STAR MARGARINE would find lasting fame and success for its “Iba na’ng Matangkad” ad campaign, brand marketing toyed with many selling propositions—from the product being a beri-beri fighter in 1951 (STAR had Vitamin B1), a vitamin-rich cooking aid, to a flavorsome, nutritious spread (“STARS for Flavor” was the slogan).

In 1960, STAR MARGARINE continued to be sold for its value-for-money health benefits, dimensionalized  as giving your body “drive and energy” , at a little cost. A tablespoon of STAR, the ad claims, has energy-giving value that is equivalent to a glass of milk, two eggs, and a slice of beef. A series of 3 print ads ran in color on leading weekend magazines, as shown here. 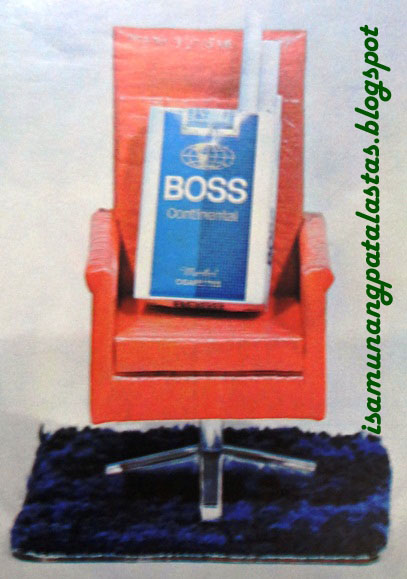 By the start of the new 1970s decade, Lucio Tan;s Fortune Tobacco Corporation was riding the wave of success courtesy of its banner brand, Champion Cigarettes. The brand would later be joined by equally successful brands like Hope Luxury Cigarettes, More, and Fortune. 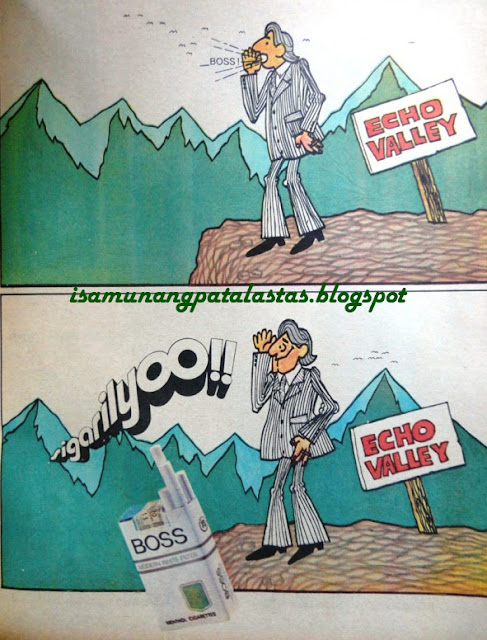 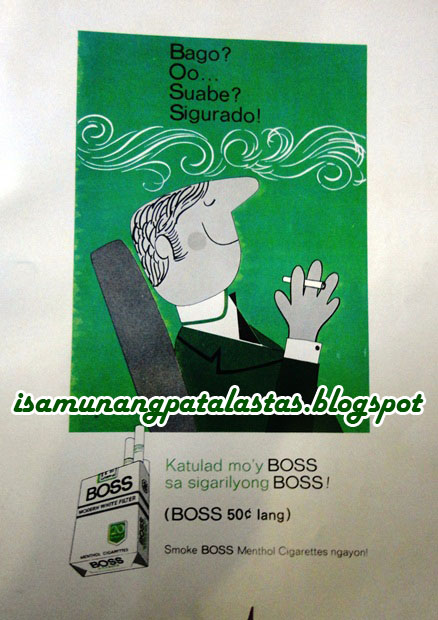 There were other less known brands like Mark, Terra, and Westpoint, but hopes were high on FTC’s BOSS CIGARETTES, introduced in 1971, which was backed by solid advertising and marketing supports. The product line, that included  Modern white filter/ Super Kings and Menthol 100s,were pushed in the market with print ads, premium items, and a TV commercial, featuring a memorable tagline—“Boss…sigarilyo!”.

In a time when cigarette advertising was not regulated, BOSS CIGARETTES continued to be available in the Philippine market through the early 2001. Since Jan. 1, 2007, when Republic Act 9211 was passed, all cigarette commercials on television, cable television and radio have been prohibited. The FTC portfolio was streamlined, and  BOSS CIGARETTES was dropped from the product line. 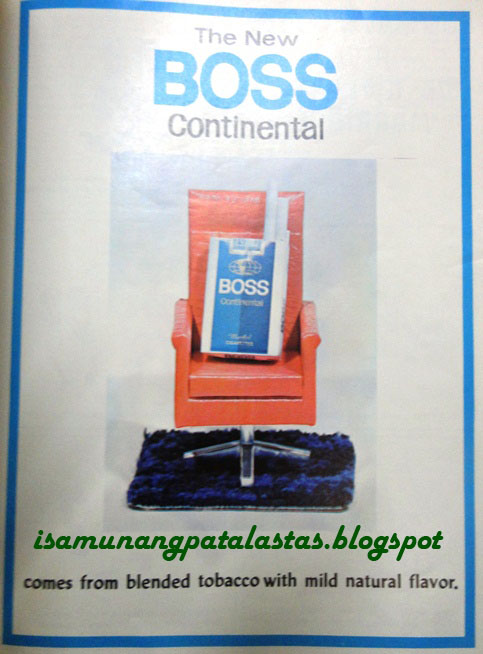 GREENWICH PIZZA is associated with Jollibee Corp. today—along with Chow King. But the country’s favorite Filipino pizza chain was started by a private individual—Mrs. Cresida Tueres—who put up a tiny pizza shop in Greenhills Commercial Center way back in 1971. She is credited with popularizing pizza with Filipino consumers, particularly budget-concious students—who found her pasta good, the pizza great, and the price right. Word spread of her special pizza and the stores that she put up --“first in fast pizza”.

In 7 years, Mrs. Tueres grew her business to a total of 20 outlets in Manila, ad with provincial outlets in Bacolod, Baguio, Batangas, Dagupan, and Iloilo. By 1994, her stores more than double  to 50 branches.

All the while, the Jollibee Foods Corporation under the Tan Cak Tiongs, was keeping watch on this rising local fast food star. The giant food corporation offered a deal that the GREENWICH owners could not resist, and thus acquired 80% of the pizza and pasta company in 1994.

The  operations and marketing savvy of Jollibee Corp. were put to effective use that yielded amazing results. Within the year a spanking-new GREENWICH branch opened at Ever Gotesco Commonwealth. Innovative products and flavors were introduced, packaging were redesigned and a new logo was launched reflecting the spirit of the new company, now known as Greenwich Pizza Corporation.   With just 53 stores, Greenwich had more than doubled its last  year’s sales from Php100 million to Php200 million!

By 1996, TV advertising, starring young teen star Rico Yan, pushed GREENWICH to greater heights, followed by the success stories of John Lloyd Cruz’s commercials. When the year ended, stores had grown to 80 branches, with sales off  and sales of nearly Php500 million.  GREENWICH PIZZA—which started as a humble pizza counter in Greenhills 50 years ago—has made history by joining the ranks of  the biggest and best fast food chains in the country today. 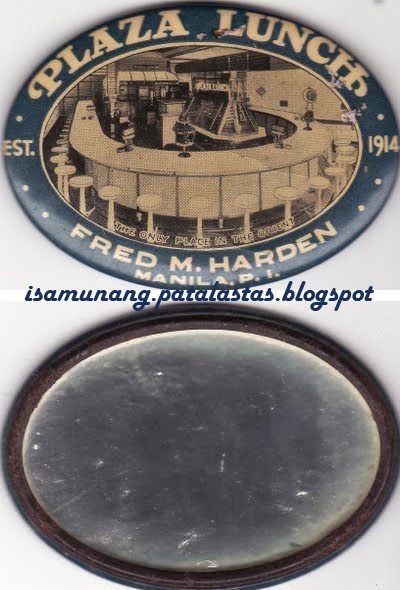 \
Celluloid pocket mirrors were favorite advertising giveaways of establishments like Plaza Lunch, a Manila restaurant established in 1914, touted as "The Only Place In The Orient"--whatever that means.

Though popular in its time, I have not uncovered much information about Plaza Lunch, but a lot can be told about its manager-founder, American Fred M. Harden. Harden married Filipina Esperanza Perez in 1917, and together they started several successful businesses, acquiring prime real estate and valuable property. 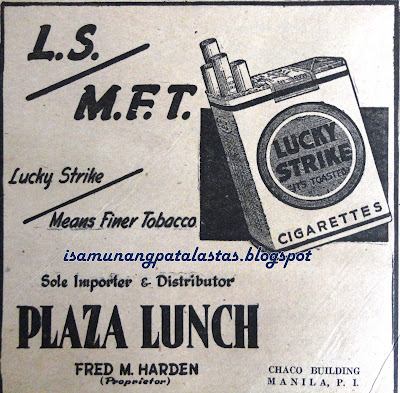 In 1938, they stopped living together. In connivance with another Filipino, Fred spirited away cash and assets from his wife, thus committing fraud in the administration of their conjugal ownership of properties. Sued by his wife in a case that reached the Supreme Court, Harden was subsequently jailed at the New Bilibid Prison in Muntinlupa. 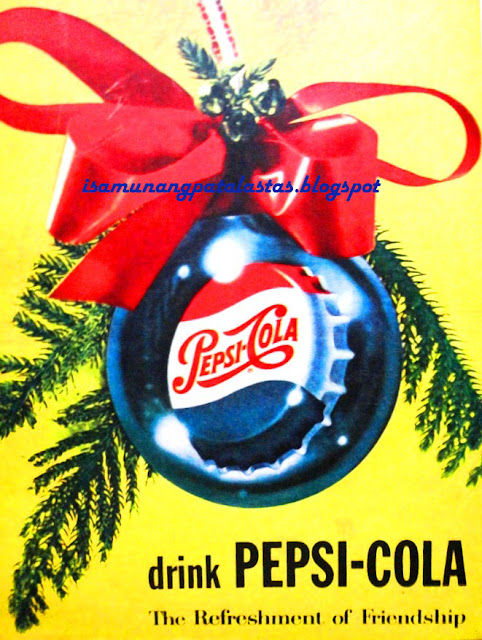 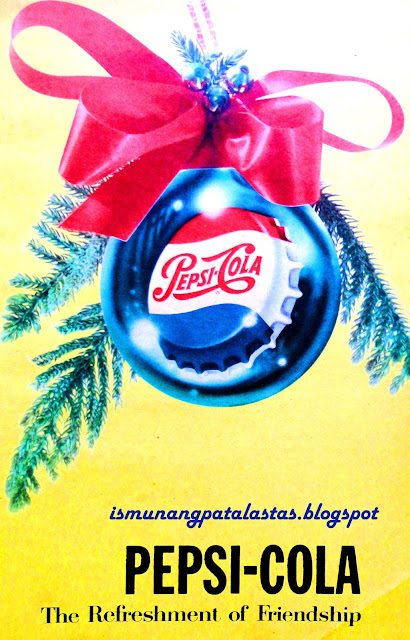 The image of Santa Claus that the world is most familiar with, was largely shaped and influenced by the SANTA CLAUS in the Coke ads that were illustrated by Haddon Hubbard "Sunny" Sundblom (b. 22 June 1899/s.10 Mar.1976), of Michigan, an artist of Finnish and Swedish descent. He was commissioned by the Coke advertising agency, D'Arcy Advertising to provide the illustration. Sundblom was inspired by Clement Clark Moore's 1822 poem "A Visit From St. Nicholas" (or  "'Twas the Night Before Christmas) for his initial studies.

As the Coca Cola Company wanted a SANTA that was realistic and wholesome, Sundblom designed one that was just that—a pleasantly plump, smiling SANTA with a warm personality like no other. Sundblom’s SANTA CLAUS first appeared in Coke ads in 1931 in The Saturday Evening Post, the Ladies Home Journal,The New Yorker and National Geographic, from where these ads came from.

Sundblom’s SANTA CLAUS appeared on holiday ads from 1931 to 1964, distributing toys to children, playing with kids, checking on refrigerators, reading letters. The Coke SANTA was used in many merchandising materials—from lifesize standees to calendars, billboards and even dolls—now pop culture collectiles. Over time, Sundblom's creation became the quintessential image of the most recognizable Christmas character in the world. 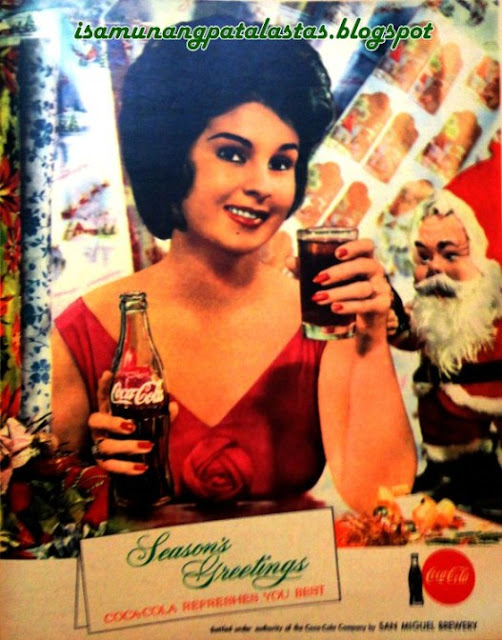 The Coke SANTA never appeared in Philippine ads, although a plush SANTA doll modeled after Sundblom’s iconic illustration appeared as a prop in one ad featuring actess Jeaan Lopez in 196 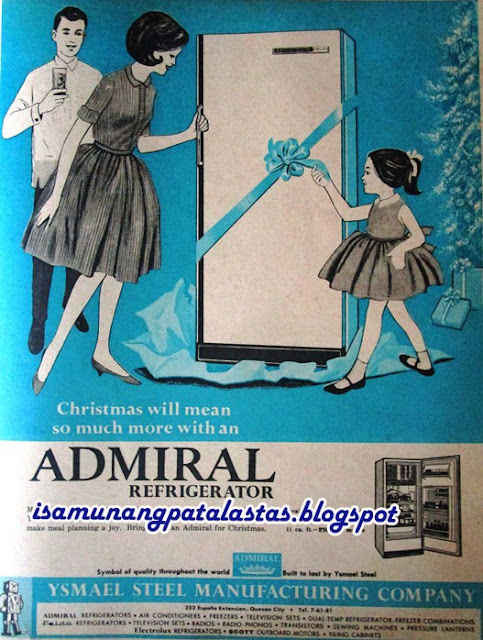 In the Philippines, there’s no Christmas without a Christmas bonus—and with Filipino consumers having extra money to spare,  it has been their habit  to  splurge on the latest appliances for their homes (the smart phones, tablets and laptops are still half-a century away from the 60s decade). No wonder, consumer durable advertisers become busier than usual during the holiday season, as proven by these ads from 1961, 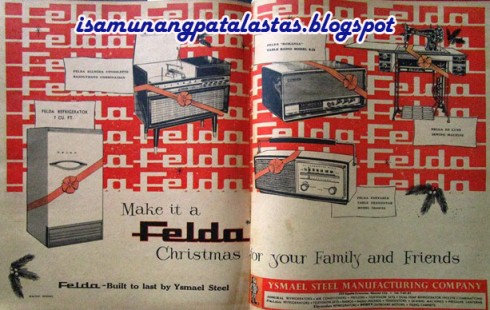 YSMAEL STEEL was already already a byword in 1961, with a reputation for making high quality home appliances, especially those under the trademark “Admiral”. It was founded by the prominent Ysmael family, and was helmed by Felipe “Baby” Ysmael Jr.after his mother passed away. 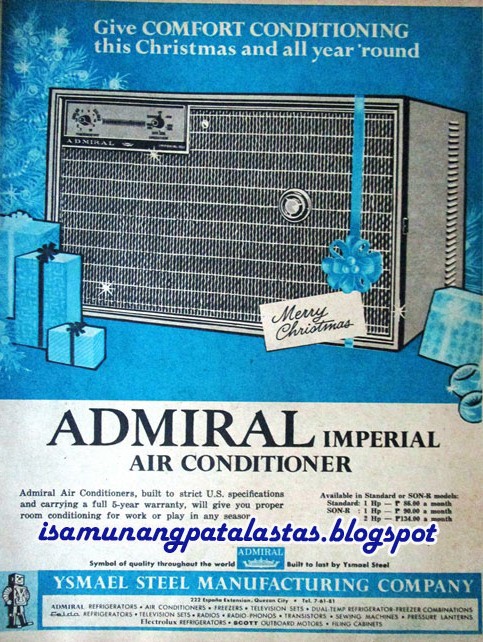 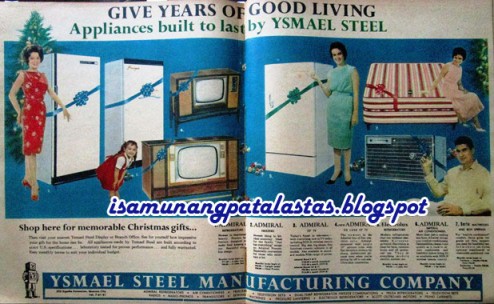 In its heyday, the Ysmael Steel factory along España Extension had a spacious lawn on which  a gigantic Ysmael Steel robot stood like a city landmark. It also fielded a winning basketball team called Ysmael Admirals, which competed in the MICAA (Manila Industrial and Commercial Athletic Association), the forerunner of PBA. 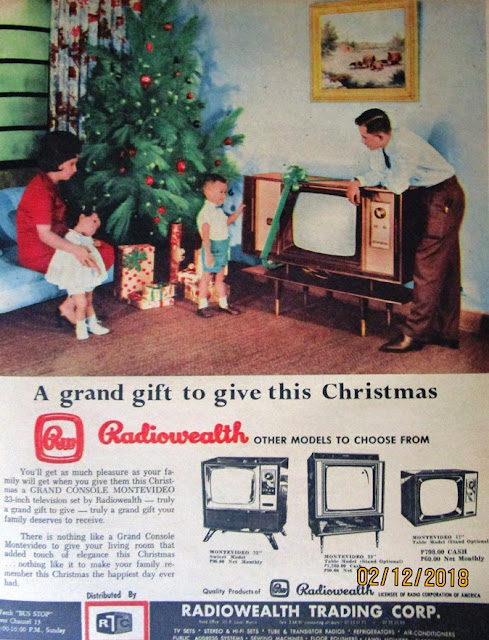 Also an established appliance brand was RADIOWEALTH, founded in 1930 Camarines-born Domingo M. Guevara who took up a correspondence course to become a radio technician. He took his one-man radio repair shop and transformed it into an appliance manufacturing giant that made radio phonos, TV sets, and music cabinet entertainment systems. 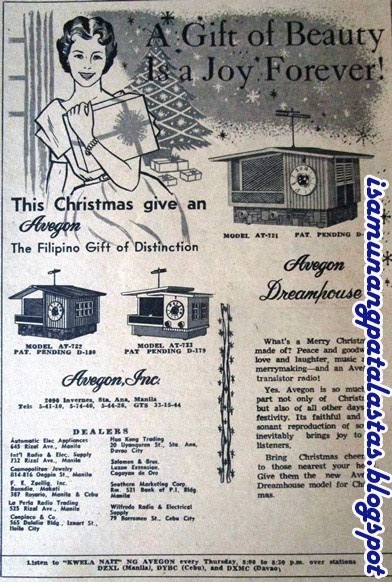 On the other hand, AVEGON was the brainchild of Engr. Antonio Nepouceno Avecilla of  San Fernando. In 1953, noting the burgeoning radio industry thanks to its rising use as an entertainment and marketing medium, Avecilla teamed up with a friend, Joaquin l. Gonzalez of Baliwag, and pooled their money together to form a fledgling manufacturer and importer of electrical appliances called AVEGON INC., coined from their 2 surnames, AVEcilla and GONzalez. Their enterprise became a huge national success. 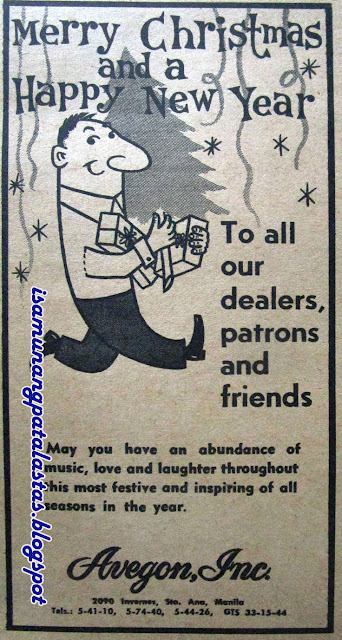 These are some of their ads that saw print during the season of refrigerators, air conditioners, stereos, radio phonographs, and TV sets--Christmas!!