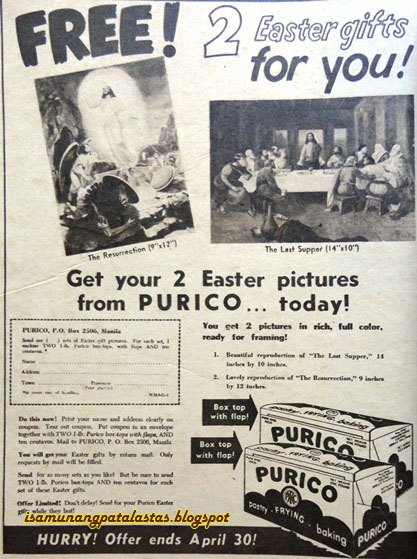 Procter and Gamble PMC’s leading cooking product, PURICO, was a highly advertised and promoted brand during its heyday. For its 1953 Holy Week offering, PURICO gave away 2 religious pictures of The Last Supper (14 x12 in.) and The Resurrection (9 x 12 in.). To get these, one had to mail a letter addressed to PURICO’s post office box, enclosed with a filled-out  magazine coupon,  2 PURICO boxtops with flaps, and 10 centavos. The pictures were mailed back by PURICO, for framing by the happy customer, to be reflected upon on Easter! 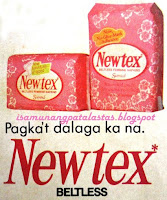 Kimberly-Clark, founded in 1872, has been making personal healthcare products  that have become global consumer brands, distributed in over 150 countries. Kimberly-Clark Philippines Inc. began operations in 1964, and gave Filipinos such well-known products as Huggies, Scott Tissues, Kleenex and Kotex sanitary pads.

These products have performed creditably well in the local market, especially Kotex. But Kotex had a high-end, older image, so a new napkin was introduced to cater to the younger segment of the market, in the hope that they get to practice napkin usage early, and then graduate to Kotex as they grow older.

NEWTEX Beltless Feminine Napkins  were thus launched in the summer of 1987, priced lower than Kotex and made to answer the basic needs of the POME (point-of-market entry) target, who are starting or about to start their period. Thus, Kimberly-Clark’s NEWTEX was positioned as the napkin to use in an adolescenet’s lovely transition to womanhood in a campaign by Hemisphere-Leo Burnett.

“Pagka’t Dalaga Ka Na” succeeded in hitting this pre-teen market although the approach was not meant to shut out other potential users of the brand. The agency opted not to show much of the product but to visualize this new exciting phase of a young girl’s life, as captured by some of the copy used: “It’s that time of your life when everything’s new and exciting. You’re starting to wear shoes with heels. And a bra. And you’re not very conifident. Mabuti na lang may NEWTEX beltless. At least, during that time of the month, makakasiguro ka!”.
Young, upcoming star Jennifer Sevilla was cast as the epitome of a girl on the verge of womanhood, and a TV commercial was produced with her as the star. Other young celebrities who appeared in Newtex ads include Janice de Belen and Lea Salonga.
The NEWTEX “Pagka’t Dalaga Ka Na” campaign would win a Bronze Award at the 1987 Philippine Advertising Congress Awards.

Carmita “Carmi” Martin, (b. 7 Aug. 1963) entered showbiz through the modeling route. Before she made a splash in a Dolphy movie,  Carmi was auditioning for modeling jobs, and one of her early ads was for FLAIR Shampoo, a product of Cromwell Commercial Co., which used to manufacture the highly popular  Glo-Co brand of cosmetic and personal products in the 1950s.

FLAIR Shampoo was available in 3 variants—Lanolin Glow for normal hair, Protein Rich for dry and damaged hair, and Lemon Fresh for oil hair. Carmi was just 16 when she appeared as the anonymous model for FLAIR Shampoo, which proved to be a short-lived brand.

For Carmi, however, her rise to stardom was just about to start. In fact, just a year after, she was cast in the blockbuster movie, “Dolphy’s Angels” , along with Liz Alindogan, Anna Marie Gutierrez and Yehlen Catral. More movies with the Comedy King followe after: “Stariray”, “The Quick Brown Fox”, “John En Marsha”, “Dancing Master”, “Dino Dinero”, and Dobol Trobol (her last movie with Dolphy, 2008).

Carmi also was to become the leading lady of action stars--Fernando Poe, Jr., Lito Lapid, to name a few. Her comedic talents showed when she was paired with Chiquito, Jimmy Santos, Redford White, and the popular triumvirate Tito Sotto, Vic Sotto, and Joey de Leon 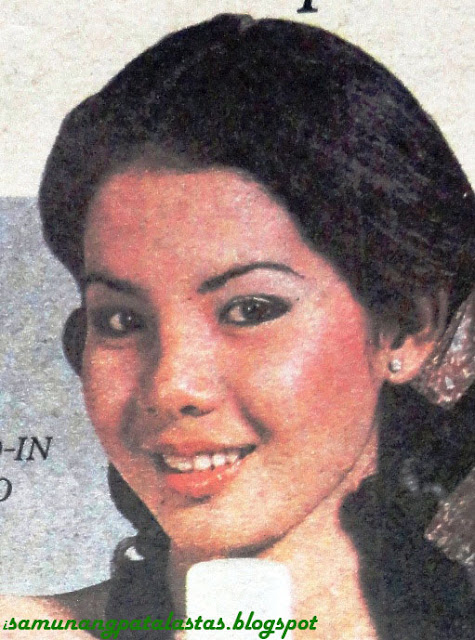 By the mid 1980s, Carmi was a top sexy star, starring in hit TV series like Chicks to Chicks (1984), That’s Entertainment (1987) and hosting her own show with Roderick Paulate, “Tonight with Dick and Carmi” (1988-91). She went on to make notable films such as “Cain At Abel”, “Bagong Hari”, “Bayan Ko: Kapit Sa Patalim”, “Hot Property” and her comedy hit “Working Girls”. 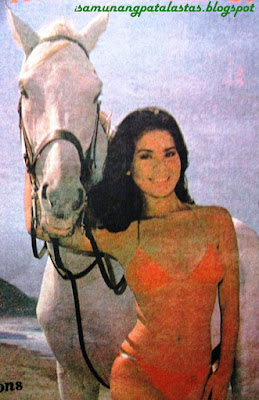 Of course, as a certified star, Carmi’s modeling services were now eagerly sought by more high-profile, and better-known brands. At the height of her career, she bagged a plum  endorsement deal sought-after by many commercial  celebrities—Carmi was chosen to be the WHITE CASTLE Whiskey Girl. 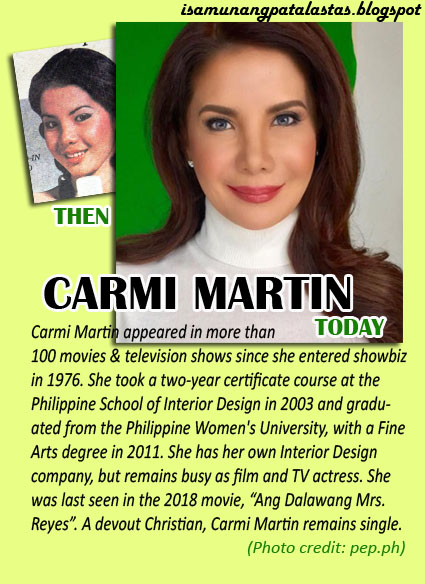 The 1988 Print Ad of the Year blrew competition away through sheer star power. The stunning ad, a full color magazine spread for LUX Beauty Soap, featuredthree of the year’s most recognizable faces in Philippine show business: Movie star Sharon Cuneta, singer Kuh Ledesma, and then up-and-coming starlet (and presidential daughter) Kris Aquino. “Starcare” was a creation of J. Walter Thompson, which has had LUX manufacturer. Multinational heavyweight Philippine Refining Company, as a worldwide client since the 1950’s.

“LUX has always been about celebrities,”says JWY Executive Creative Director Socky Pitargue,”and it has always been important to choose the right names and faces.” The last Filipina endorser Pitargeue recalls was screen actress Hilda Koronel, and the launch of three new variations for normal-to-dry, oily, or sensitive skin was the perfect excuse to go beauty-hunting. The idea was clear: three superstar faces using there classy variatons of one glorious product. 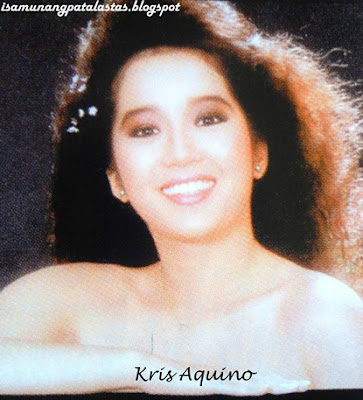 The original plan had been to shoot three separate print ads for each of the models, but Pitargue had a more ambitious idea.”Why not get them together? Why not come out with one big ad two or three times for maximum impact?” Pitargue even predicted the fans, especially young girls, would tear the ad out and use it as a poster—which research shows they did. 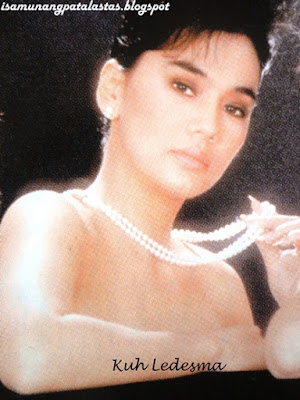 After PRC had closed deals with three celebrities, chosen for their individual styles as well as their beautiful complexions, Pitargue, creative irector Adele Estrada and executive art director Edwina Arroyo confronted another logistical hurdle: how to get the three stars together for a photo session. “That’s when we decided to get a fourth superstar to take the photograph,” Pitargue says. Millionaire businessman, philanthropist, and high profile hobby photographer Jaime Zobel de Ayala had never done any commercial photography before, and he welcomed the project. 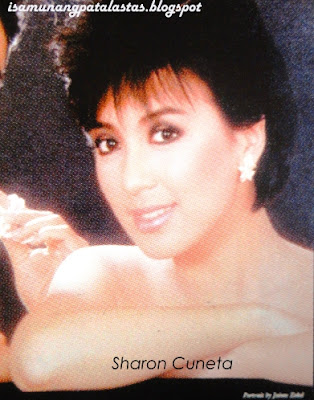 The strategy worked. With a reputation bigger than those of his subjects, Don Jaime called the shots. “He asked the ladies to be at his studio at 7 pm. sharp,” Pitargue recalls,”or he would close the doors. The trio complied, and the shoot was over in less than three hours. Don Jaime’s professional fee, Pitargue reports, was subsequently donated to charity.

Bare arms and shoulders for the subjects were decided upon early, to do away with the problem of coordinating outfits. Neither did the agency ant anything to distract from the glowing complexions. The three LUX variations were photographed for the same poster and reinforced with copy in small text, but the yes remained rivettted on the unmistakable stars of the spread.

The print ad ran alongside three slick TV commercials, individually featuring Sharon, Kuh, and Kris. JWT git the media exposure they wanted, and LUX is still happily riding on the fame of cinema’s most stellar skins.