In observance of Rizal Day this December 30, let us take a look at the role the national hero has played in the marketing of consumer goods, products and service. Dr. Jose Protacio Rizal, has been immortalized in monuments, schools, streets, avenues and stamps, and his noble qualities extolled in  songs and books.

Rizal has also inspired manufacturers to name their products after him, in the hope of winning national attention like the iconic hero. Over the years, there have been Rizal brands of cement, matches, banks, insurance companies, kerosene and softdrinks. In more recent times, Rizal has also lent his name and image in pop culture products, and at least one music band has adopted his name.

There are acts prescribing the code of national symbols like our flag, coat-of-arms and anthem, but only general advertising standards with regards to respect for country, religion, culture, symbols and traditions. Rizal—because of advertising media—is remembered not just as a national hero, but also as a brand of matches and cement. How’s that for brand recall?

The immediate years that followed after the Aquino assassination was fraught with unrest, uncertainties and public outcry against Marcos. Although the “Ito ang Beer” campaign of SAN MIGUEL BEER was firmly in place and TV commercials featuring the riotous gang of Bert Marcelo, singer Rico J. Puno, ractrack king Jockey Eduardo, boxing champ Gabriel ”Flash “ Elorde and billiards wiz Amang Parica were getting great recall, 1985 still turned out to be a trying year for businessmen in particular, and for Filipinos in general.

The Philippines faced unprecedented economic instability; companies watched their sales plummet.”The problems were economic.” Recalls copywriter Romy Sinson: ”People were having a hard time. There was even a call for the boycott of San Miguel products, as Danding Cojuangco was a personal friend of the Marcoses.

Some morale boosting was in order, and Sinson put the inevitable idea into words.”Despite everything, tuloy ang Pasko. Nothing can stop the coming of Christmas”. Thus SAN MIGUEL BEER's most unforgettable campaign for 1985 was born.

The result is a commercial that became a Creative Guild Ad of the Month, featuring the usual San Miguel beer barkada, with folk minstrel Florante  singing of the joyful coming of Christmas despite the lean, hard times:

The radio component of San Miguel Beer’s “Tuloy ang Pasko” campaign did even better as it was adjudged later as the 1985 Radio Ad of the Year by the Creative Guild of the Philippines.

The Jingle, for which Lorrie Illustre put Sinson’s lyrics to music, was a testimony to the Filipino’s resilience and ability to plod on.”Tuloy ang Aguinaldo”, the ad begins, and with that come staples like simbang gabi, caroling, Christmas itself and lest we forget, San Miguel Beer.

87. THE CAROLS OF CHRISTMAS: Christmas Traditions in Philippine Ads

Christmas carols began in the west, and the earliest  one in modern form was written in 1410. The carol was about Mary and Jesus meeting people in Bethlehem. Most Carols from this time were loosely based on the Christmas story, sung by minstrels wherever they went.

The Americans introduced their English carols here and has since become a part of the Filipino Christmas tradition. As early as November, you would find children carolers out on the streets, singing Christmas carols from house to house spreading musical cheer, accompanied by improvised instruments like tansan tambourines and tin can drums.

Christmas carols available to Filipino carolers were mostly  in English---Silent, Night, Jingle Bells, O Holy Night, Joy to the World.  Local versions were made by translating these into English.

The first known Christmas carol was originally composed in Cebuano by Vicente D. Rubi and Mariano Vestil in 1933. “Kasadya ning Táknaa”(How Blissful is this Season) was translated into Tagalog  by Josefino Cenizal in 1938 but the lyrics of Levi Celerio done in the 50s, remained to be the most popular. This carol is widely known today as "Ang Pasko Ay Sumapit".

After being given their envelopes or coins, the carolers end their visit on a note of gratitude by singing: "Thank you, thank you, ang babait ninyo ...thank you...."

These ads celebrate our caroling tradition, from our holidays of the past that are now long gone, but never forgotten.
Posted by Alex D.R. Castro at 3:30 PM No comments:

For Filipinos, Christmas is the brightest and most colorful of holidays—and they make sure the world knows that. Before the advent of LED (light emitting diode) bulbs, light bulbs in color were manufactured by the two leading lighting companies—PEMCO (Philippine Electrical Manufacturing Company) and the world-renowned PHILIPS Lighting.

The colored bulbs were practically the same ordinary light bulbs with a twist—the inside of the glass bulb was painted with colored paints. Before colored bulbs, one had to wrap a regular bulb with colored cellophane to change its hue.

The lighting division of the giant Dutch technology company—PHILIPS—began operations in the Philippines in 1918. It also made short-wave radios at the onset, but it was its lighting solutions that made it a popular brand in the market.

PHILIPS was the first to introduce these colored light bulb novelties to the local market in 1957, positioning them as “mood lights” for upscale homes and gardens. Eventually, these PHILIPS Colored Lamps were advertised specifically for the holiday season, as shown in these spread of ads from the 60s.

PEMCO introduced its own versions in the early 1960s. with an array of light bulbs—including colored fluorescent and incandescent lights.

PEMCO was part of ANSCOR, multi-holdings company founded by Spanish-Filipino industrialist Andrés Soriano, Sr. (b.1898/d.1964) in the 1930s. It began advertising its line of colored light bulbs in color ads that ran in the weekly magazine, The Sunday Times.

The ads of PEMCO and PHILIPS vied for attention in their weekly ads in color—on the premiere magazine, the Sunday Times. “Joyous as the glow of Christmas night!”, one PEMCO ad enthuses while PHILIPS was singleminded in the promise of turning the holiday into a festive occasion, by “making the holiday spirit more colorful!”.

The two companies started a rage for colored bulbs until the decade of psychedelia waned and gave way to the grim and turbulent 70s.

Considered as one of the most powerful women of media—being a top executive of the largest media and entertainment conglomerate in the Philippines,  CHARO SANTOS started from the ranks, working her way up the corporate ladder by taking on many paths that proved her mettle, creativity, managerial skills,  and business savvy.

She was born Maria Rosario Navarro Santos (b. 27 Oct. 1955), to Dr. Winifredo Santos and Nora Navarro from Oriental Mindoro. Her initial route to fame was through beauty pageants—at age 16 she won the 1971 Miss Southern Tagalog Athletic Association title and was crowned Miss Calapan two years later.

But it was while a student of St. Paul’s College that Santos started gaining national attention when she won a string of beauty titles, beginning with Miss Green Race 1974—a pageant designed to drum up publicity for the Green Revolution project of then First Lady, Imelda Marcos.

In 1975, Santos was named as one of Manila’s Five Prettiest for the year. As if that was not enough, she topped the 1976 Baron Travel Girl, a prestigious corporate pageant.  In between, she became a professional ramp and commercial model, appearing in “Bagong Anyo” fashion shows and in a few print advertisements as featured here. 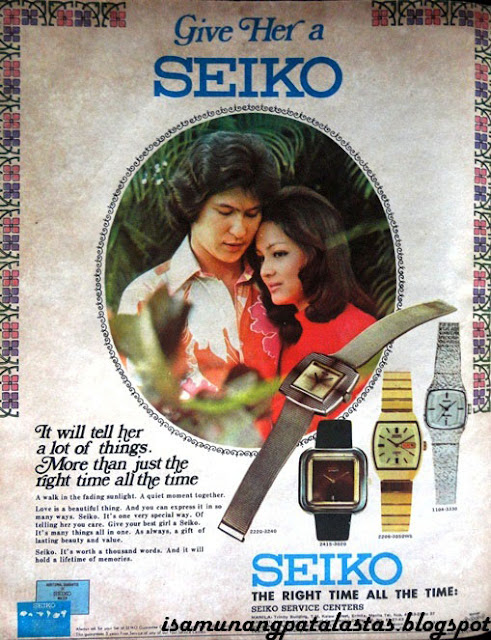 SEIKO was already a world-renowned Japanese watch company when it began marketing SEIKO branded clocks and watches in the Philippines beginning in 1967. They quickly began to gain market share in the country because of its material and workmanship quality and affordability. The latest models of SEIKO Watches were advertised on print, and Charo Santos was chosen to model the ladies’ line in 1975.

JOIE was a cosmetics line produced by Vibelle Manufacturing Corp.—the same maker of the popular Caronia Nail Polish. Introduced in the early 1970s, JOIE COSMETICS included products like lip gloss, capless lipstics, beauty cake, pressed powder and even a herbal shampoo. Charo Santos became the face of JOIE, and for awhile, JOIE had a brief run of commercial success. Marketing of JOIE was gradually discontinued as the personal care market changed due to changing consumer expectations.

After graduation from college where she graduated cum laude, Santos forayed into the movies both as an actress and as a producer. Her performance as the possessed girl in Mike de Leon’s “Itim” won her the 1977 Asian Film Festival Best Actress Award. In the 1980s,  she produced such classics as Oro, Plata, Mata and Himala under the Experimental Cinema of the Philippines. She became the creative force behind the productions of Vanguard Films and Vision Films before moving to Regal Films. In 1987, Santos was invited to join the newly re-opened ABS-CBN and began her ascent to the top of the corporate ladder. The rest is history. 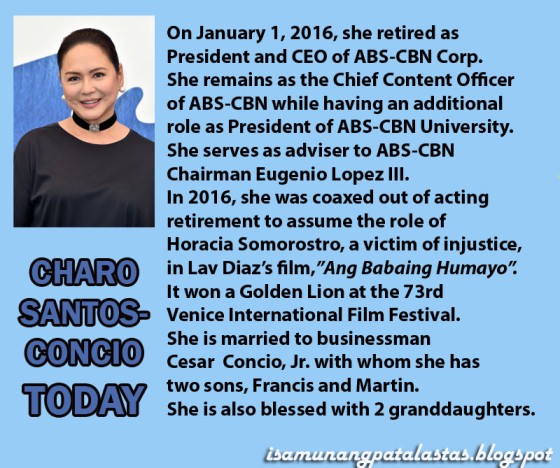