The veteran actor (and former Philippine Scout) Eduardo “Eddie” Verchez Garcia ( b. 2 May 1929/d. 20 Jun 2019), had a long illustrious 7-decade career in showbiz, and was on the side, a director, producer and TV personality. 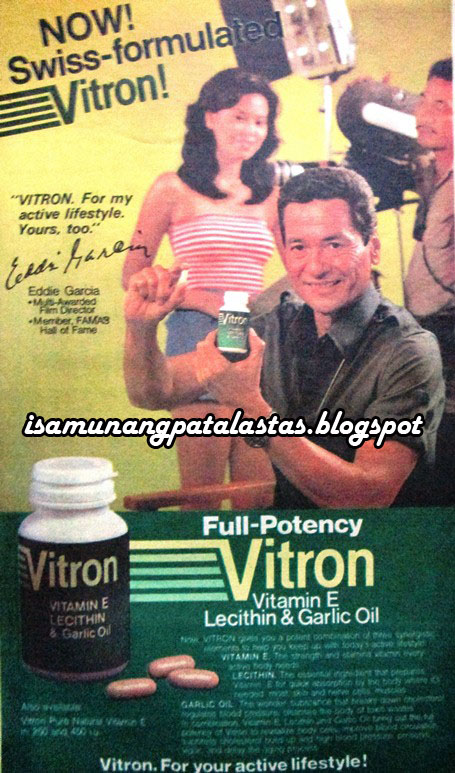 The character actor was initially known for his villainous portrayals, but through the years, these  have come to include gay, father, grandfather, superhero, kitschy and other offbeat roles.  Garcia’s last appearances before his untimely death in a filming accident were in “Hintayan ng Langit” and  “Rainbow’s Sunset” (2018).
WATCH ANDY PLAYER SPECIAL AD
with EDDIE GARCIA, ca. 1985
(youtube upload: aianchan)

Later in his career, Garcia found fame starring in TV programs including Little Nanay (2015–2016) and Ang Probinsyano (2016–2019). He is the only one to be inducted in three categories in the FAMAS Hall of Fame: for Best Actor, Best Supporting Actor, and Best Director, and the only Filipino to win the Asian Film Award for Best Actor.

It was only at this stage in his life that advertisers took note of his appeal and pulling power. Garcia did a few commercials, like the ones you see on this spread.  You can see why Eddie Garcia was widely revered as the "greatest Filipino actor of all time".

The repetitive line, incorporated in a simple, but unforgettable jingle, raised awareness for CHAMPION to an all-time level that made the brand one of the most well-known in the 70s.

All the agency needed to do was to refresh the commercial with sub-themes like “The CHAMPION Generation”, “CHAMPION dumiskarte”, “The Brand of Champions”,  but always retaining the “CHAMPION talaga” element.

However, since January 1, 2007, when Republic Act 9211 was passed, all cigarette commercials on television, cable television and radio have been prohibited. CHAMPION, which celebrates its 50th anniversary this year, continues to be produced and has its own following despite the absence of media advertising. 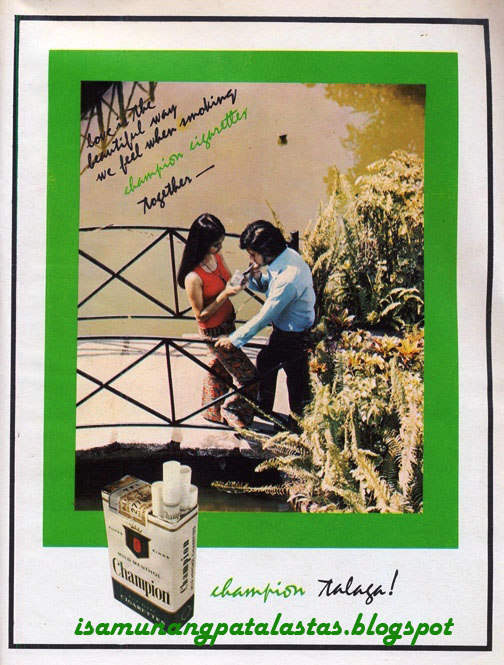 
HUNT’S, a name associated in the Philippines with Pork and Beans, began as the Hunt Bros. Fruit Packing Co., in Sebastopol, California, founded by brothers Joseph and William Hunt. It originally was a canning company that canned fruit and vegetables from California farms, but by 1941, it was into canned soups, fruits, vegetables and juices.

In 1943, Norton Simon's Val Vita Food Products of Fullerton, California merged with the packing company, and the new business was incorporated as Hunt Food and Industries, Inc.  It also streamlined its operation by focusing on canned tomato products.

In fact, the first HUNT’S products that were distributed in the Philippines in the mid 1950s were HUNT’S Tomato Sauce, HUNT’S Tomato Catsup and HUNT’S Pork & Beans. HUNT’S Fruit Cocktail  was the only fruit-based canned product it sold here in the Philippines 1957. The print advertising carried the famous slogan “Hunt-- for the best”, which would be used for many years.
In 1956, a group of businessmen formed a company known as the Pure Foods Corporation, which manufactured processed meats and food products under the Pure Foods brand name. Ayala Corporation acquired substantial shares in the company in 1965. It also acquired the right to manufacture HUNT’S Pork & Beans, made from high quality Great Northern Beans and real pork bits covered in rich, thick, sweet tomato sauce. It was distributed by Atkins, Kroll & Co. Inc., along with HUNT’S Tomato Sauce and Catsup, but HUNT’S Pork & Beans would remain its best seller and flagship brand.
HUNT’S Pork & Beans became a sort of a favorite “emergency food”,  as it was affordable and could be eaten straight from the can. It had very little competition in its time, so it became the country’s largest-selling canned pork and beans for many years.

But the decades that followed saw major changes with the mother company, HUNT’S Food and Industries Inc. In 1960, it merged with Wesson Oil & Snowdrift Co. to become Hunt-Wesson Foods.  A series of mergers happened in through the 80s, until Hunt-Wesson, the company which included the Hunt's brands, was sold in 1990 to ConAgra Foods, a leading packaged food company of North America.
Meanwhile, Pure Foods dropped HUNT’S as it began making its own brand of pork & beans in the early 1980s. Around 1984, Universal Robina Corp, came to an agreement with ConAgra Foods to manufacture and market HUNT’S Pork and Beans  in the Philippines under this 50-50 joint venture.
More recently, in May 2017, Century Pacific Food, Inc., the country’s canned food-producing leader,  acquired the Philippine license  for HUNT’S Pork and Beans, from the URC group. The deal includes the right to manufacture, sell and distribute Hunt’s branded products in the Philippines from Hunt’s-URC. HUNT’S Pork & Beans continue to lord over the ready-to-eat canned beans product category, with a commanding 86% share of the market. 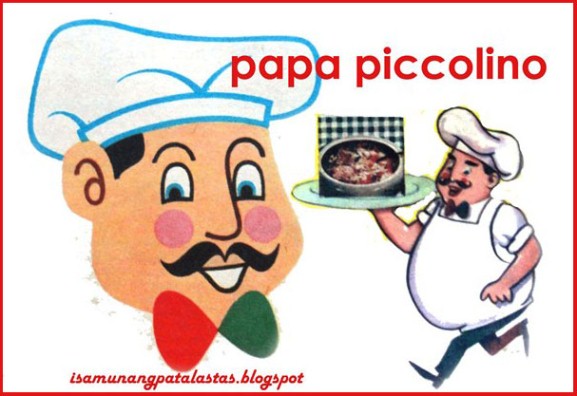 In 1968, the country was introduced to PAPA PACCOLINO a jolly, portly Italian chef with his trademark mustache. He was the brand character for a new line of “Real Italian” boxed pasta products for dishes and soups.

It was by Republic Flour Mills (now RFM Corporation), which ventured into flour manufacturing in 1957, even though wheat wasn't being grown in the Philippines.

The name  PAPA PACCOLINO was reworked from the title of a 1953 hit song, “Poppa Piccolino", sung by Diana Decker The brand was active throughout the rest of the '60s, its line expanding to include soup varities and pizzas.

Papa Piccolino appeared practically in all print materials, but the novelty wore off as the '70s rolled in. PAPA PACCOLINO was replaced with a real endorser, host-singer Pepe Pimentel, who more or less exuded the same chirpy, friendly vibe as the cartoon character. 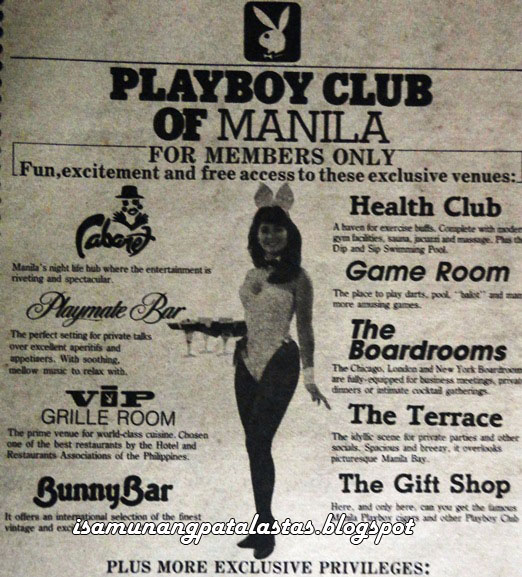 On  August 26, 1978, the doors of the Playboy Club of Manila, swung open at the Siahis International Hotel, joining the sophisticated and uber-exclusive Playboy Clubs around the world. Hugh Hefner built the Playboy empire in Chicago in 1953, with the launch of Playboy Magazine. 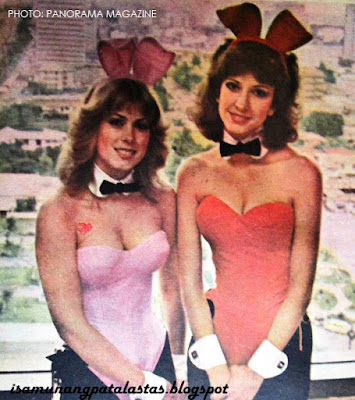 The men’s lifestyle and entertainment magazine is notable for its pictures and centerfolds of near nude and nude women, awakening America’s sexual revolution. Then-unknown Marilyn  Monroe appeared in the very first issue. 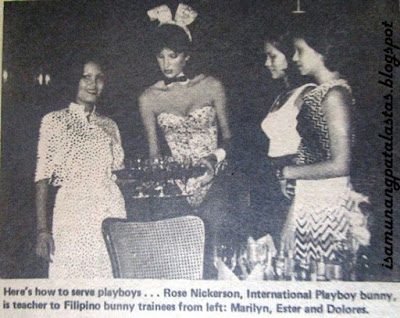 Hefner parlayed the brand’s success by founding the Playboy Club,  which, initially was a chain of nightclubs and resorts. The first club opened in Chicago, Illinois on  February 29, 1960. The clubs were a big hit, and Hefner’s enterprise rolled-out the Playboy Club product internationally. 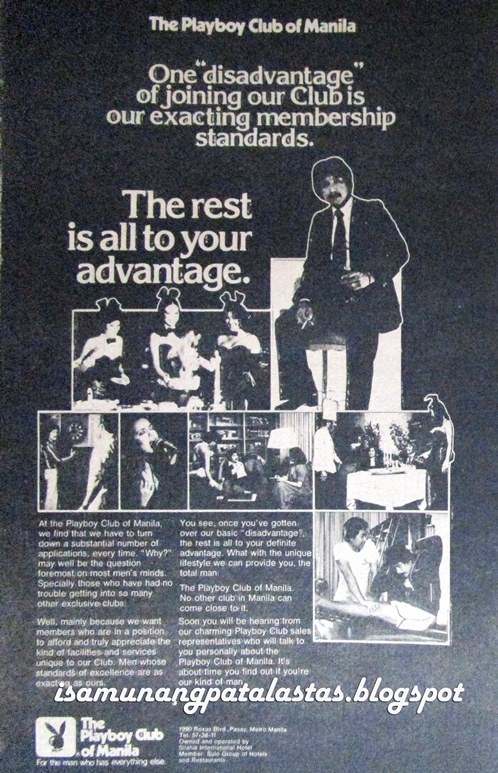 Businessman Leandro “Biboy” Enriquez, a known Filipino hotelier and considered as one of the pioneers of Manila’s night life, secured a franchise from the Chicago-based Playboy Club International, and began its operations by offering memberships. From 5,000 applications, an initial 3,000 members were approved, that included top Manila executives, diplomats, and male members of rich and prominent families.Members were asked to abide by the rule: “just look, don’t touch”. 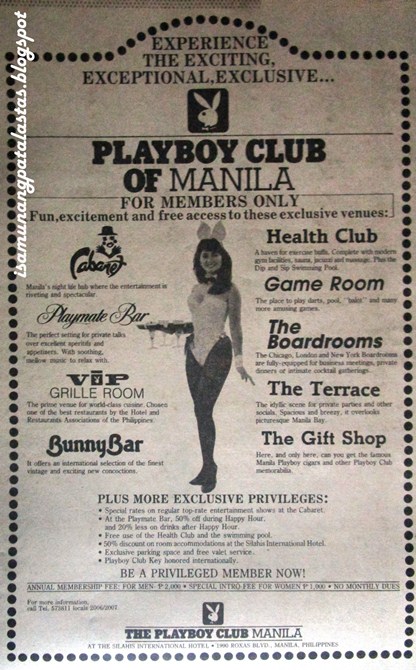 That’s because the Playboy Club was manned by “Playboy Bunnies” dressed in revealing cottontail outfits, with trademark bunny ears and cuffs. Of the over 1,000 bunny applicants, only 50 were chosen, trained by the directress of the Playboy Bunny International, Harriet Bassler, who flew over with Playboy bunny mentors, Gabrielle Conklin, Rose Nickerson and Christine Shaw.

The imported Bunnies trained the locals on the finer points of Playboy club stylized service—like doing the “Bunny dip”when serving food and drinks. The training lasted for a month and a half. 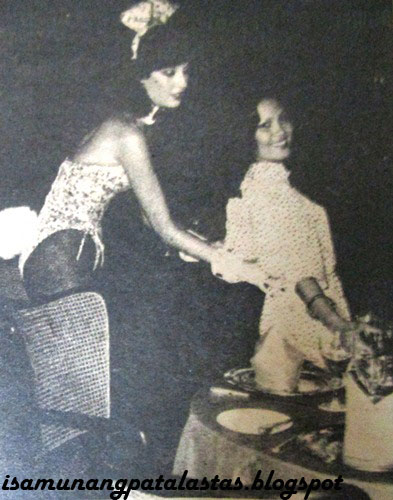 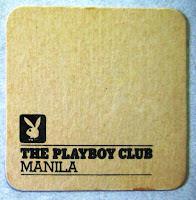 The Playboy Club of Manila had a good run in the 80s  and its live entertainment that featured such discoveries as Gigi Galon and Dale Adriatico, were the talk of the town. But tastes were changing as Makati became the commercial and social hub of the rich and famous.

The turbulent times in the 80s led to a downtrend in the economy and businesses, including those of Marcos cronies. The Enriquezes, who were a part of that circle, also felt the pinch. Manila’s Playboy Club closed down permanently in 1991.

These few ads, created by Advertising and Marketing Associates (AMA) are the sole reminders, of the years when the Playboy bunnies came to town.